Winnie Monsod is as good as her word 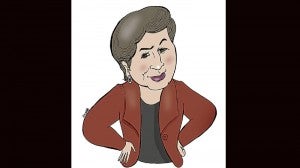 At a recent forum, we were asked to talk about how TV can be used to build trust in a huge organization, especially during times of disaster and crisis.

What, officers of the company wanted to know, were some of the “trustworthy” qualities in a company officer or spokesperson that would encourage viewers to believe in him and what he said, and to feel confident that something substantial and decisive was being done to expeditiously and yet also sensitively alleviate the crisis? To help clarify the point, could we name specific people who appeared on TV to serve as touchstones or sterling examples in this regard?

Instantly, we came up with our first example: Winnie Monsod. Some people were surprised. Why Winnie, first and foremost? Our explanation: In a crisis situation that can adversely affect the populace, viewers want to be assured that the right response would quickly and yet sensitively be made. To save lives, minimize damage to property and start the process of physical and psychological healing.

For that to happen, “official” statements must not come off as officious, and viewers would implicitly trust the bearer of the message.

Given that objective, somebody like Winnie would fill the bill admirably, because for many years now, in both her private and public actuations, she has been as good as her word. Not once have we heard her say something she doesn’t believe in—and she says it in the clearest and most no-nonsense of ways.

In addition, she has the education, experience, intelligence, perspicacity and sensitivity for the task at hand. Having filled a number of top positions in government and the academe, Winnie knows exactly what to say and do, and her track record further encourages implicit trust, even from people who know her only from her TV appearances.

Finally, she has mastered her areas of expertise so well that she can break down complex processes and matrixes of information and action, and make them understandable and pertinent to “mere” laymen and their lives and needs.

Anyone who appears on TV should work hard to also develop those traits in himself. —To top it all off, some of Winnie’s innate courage and readiness to step on some calloused official toes would also come in handy!

To be sure, Winnie Monsod isn’t the only implicitly trustworthy person who regularly or occasionally appears on TV. We can also cite Pia Hontiveros, Behn Cervantes, Mitch Valdes, Lorna Kapunan, Cheche Lazaro, Jaime Laya and a few more.

It’s sad to note, however, that most “professional” people who appear on TV for a living don’t have or have lost the implicit trustworthiness that viewers expect. Quite a number have gotten bored with their work and success, forgetting that it’s a great privilege and responsibility to inform and entertain so many people. They don’t do the research required and simply “wing it” during interviews, because they have an exaggerated and undeserved confidence in their “competence.”

To make things worse, some TV people feel that they’re big and beautiful stars—fashion icons, even—and behave accordingly. Finally, some of them have compromised their objectivity and can now be co-opted.

Why do they think they’re getting away with it? Because some viewers can’t see through their cleverly concocted image and believe in it—and they garner praises, despite their smooth and suave duplicity.

To these and other blithe offenders guilty of so many sins of commission and omission in the lofty name of public service, may the likes of Winnie Monsod show that there is a better way!