The wanderings of a Japanese indie in Tondo (Conclusion) | Inquirer Entertainment

The wanderings of a Japanese indie in Tondo (Conclusion)

Even before shooting “Blanka,” Kohki Hasei had wholeheartedly immersed himself in Tondo’s noisome milieu: eating pagpag, getting so drunk on a chaotic mix of Emperador, Tanduay, Ginebra San Miguel and Red Horse with his “Happy Land” buddies that he had to spend the night on the floor of a Smokey Mountain hovel.

He woke up with the family dog locked in his embrace. He has not been deterred by falling into a pit filled with slaughterhouse waste.

While shooting in Bulacan for “Blanka,” he unwittingly swam in a carabao wallow. He was having so much fun that his film crew did not have the heart to tell him what was in the water, and another heinous gastrointestinal infection followed.

READ: The wanderings of a Japanese indie in Tondo

Hasei never went to film school. His roots are working class: His mother ran a beauty salon; his father sold construction equipment and his younger brother has a tailoring shop.

After high school in Okayama, a town near Hiroshima, he made his way to Tokyo. He supported himself through a series of menial jobs—as part of a road repair crew, a janitor, a bouncer or waiter at so-called ladies’ clubs (with their exclusive male clientele), a gofer at a TV station (where he learned some video technology but could not get ahead), modeling and acting. There was even a brief stint to bodily bring back for deprogramming a young girl who had joined the terrorist Aum Shinrikyo cult.

He compared how different being a gas station attendant in Manila is from Tokyo. “Some of the Japanese were so particular when I had to wash their cars, they wouldn’t have me use a sponge or a high pressure hose because these might scratch the finish. They ordered me to soap the car with just my open palms, even in the dead of winter. I had to be gentle and slow, then pat it dry and buff it with a fine chamois. It was one of the hardest jobs I ever had.”

Before his acceptance into the Venice International Biennale College Cinema, Hasei joked that the only time he was in college was when he joined 50 other squatters in a condemned building, which was part of a student dormitory complex in Tokyo University. 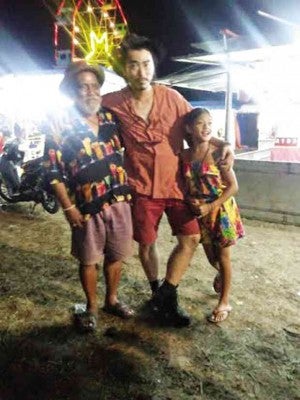 Barely out of his teens then, Hasei lived by his wits just like the street child heroine “Blanka” in his movie. He ran a colorum bar out of his squat from a makeshift counter with a couple of small tables and mismatched stools retrieved from backstreet discards. He trundled a discarded grocery cart between the university and the supermarket to buy his liquor supplies.

It was also at Tokyo University that he had his epiphany upon interacting with art and film students. He began taking his own photographs and dealing art on the side. Several of the artist-filmmakers he met in his Tokyo University days have since become steadfast lifelong friends, such as the filmmaker and videographer Yuki Hasegawa, who helped him edit his first films.

Hasegawa has generously volunteered his professional services for several weeks on “Blanka,” typically putting in 15-hour long workdays. Yuki tried to explain why he believes so much in Hasei’s vision: “Kohki is unlike most Japanese, even among those in the creative industry. He is an original and other creatives respect and honor that.”

Hasei’s halcyon days as a squatter at Tokyo University ended literally with a bang. One day he awakened to the boom and crash of a humongous hydraulic drill chipping away at the façade of the building he occupied with dozens of Europeans, Jamaicans and a few other Japanese drifters. They were surrounded by 400 reservists and campus security forces with linked arms and heavy weaponry.

Just like informal settlers everywhere facing eviction, they fought back with piss bombs and other unorthodox weapons before the inevitable.

Then Hasei made a living on the streets selling Zippo lighters from Vietnam. These were vintage originals left behind by fleeing American troops after the fall of Saigon, and much sought after by Japanese hipsters who paid a fortune for such prized American pop cultural artifacts.

The underground bar and art gallery were gone, but eventually Hasei became a skilled enough photographer and videographer to support himself doing what he has always wanted to do: make films on his own terms.

Perhaps such extreme life events, so contrary to the stereotypical salaryman, have deepened Hasei’s empathy for the Filipino masses.

He eschews the usual status symbols and proudly recalled how in his leaner and hungrier days, he had saved up for months to buy a pair of $1,000 leather boots that he had long coveted—these were the only pair of shoes he owned and wore for the next 11 years until he wore them out. One can count his wardrobe changes on both hands, although now he has added a pair of nondescript sneakers and flip-flops to his footwear.

Mother Teresa would have approved of his austerity of dress and his heart for the poorest of the Filipino poor, especially the children. But Hasei is not unmindful of their very real suffering, and has committed to helping one of his “Blanka” secondary lead actors with needed medical care. It is another happy ending in the making.

Hasei knows firsthand that life is hard, but his films are a prism shining light in an imperfect world.