Judge refuses to throw out defamation suit against Cosby 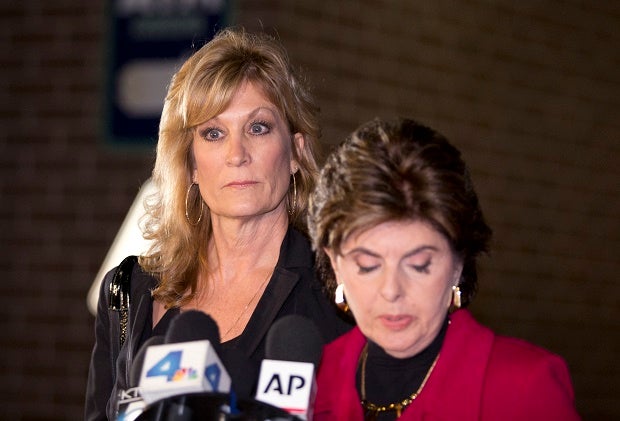 In this Dec. 5, 2014 file photo, Judy Huth, left, appears at a press conference with attorney Gloria Allred outside the Los Angeles Police Department’s Wilshire Division station. A Los Angeles Superior Court judge on Wednesday, Oct. 7, 2015, refused to dismiss Huth’s lawsuit against Bill Cosby alleging he abused her at the Playboy Mansion around 1974 when she was 15-years-old. Cosby’s attorneys argued Wednesday that the case should be dismissed because a former attorney for Judy Huth filed the lawsuit in December 2014 and included Cosby’s name, despite rules that the comedian shouldn’t have been identified by name in the case.AP FILE PHOTO

BOSTON — A defamation lawsuit brought against Bill Cosby by three women who say he sexually abused them decades ago can move forward, a federal judge in Massachusetts ruled Friday, delivering a legal blow to the comedian as he attempts to defend himself against accusations of sexual assault by dozens of women.

The women claim in their lawsuit that Cosby’s representatives damaged their reputations by denying their allegations in sometimes disparaging language. Cosby’s lawyers had asked the judge to dismiss their suit, arguing that the remarks were personal opinions protected by the First Amendment and legal declarations made in his defense.

But in his ruling Friday, US District Court Judge Mark Mastroianni rejected Cosby’s bid to dismiss the case before it ever goes to a jury.

The women — Tamara Green, Therese Serignese and Linda Traitz — have accused Cosby of drugging them and then having unwanted sexual contact with them.

The comments they claim were defamatory range from statements dismissing their accusations as “ridiculous claims” and “absurd fabrication” to longer remarks that sought to discredit the accusers.

“As the old saying goes, ‘consider the source,” ended one statement that touched on Traitz’s criminal and prison record.

In his ruling, Mastroianni rejects Cosby’s argument that the statements were legal declarations made in self-defense.

“The court recognizes that some jurisdictions do apply a version of the conditional self-defense privilege, which allows individuals, in certain circumstances, to publish defamatory responsive statements necessary to defend their reputation. However … such a privilege does not permit a defendant to knowingly publish false statements of fact,” the judge wrote in his 38-page ruling.

Telephone messages left for four attorneys who represent Cosby in the Massachusetts lawsuit were not immediately returned. Cosby has a house in Shelburne Falls, in western Massachusetts.

“As we’d expected and hoped, the judge rejected every one of Mr. Cosby’s attempts to throw the case out of court and allowed the case to proceed,” said Joseph Cammarata, an attorney who represents the three women.

“We will take Mr. Cosby’s deposition at the earliest possible moment. My clients look forward to moving the case forward and to restoring their good names and reputations.”

“Dateline NBC” is airing a special Friday night in which 29 Cosby accusers will be interviewed together about their allegations. Three separate lawsuits have been filed against him. Cosby has never been charged with a crime and he has denied the allegations.

Court documents unsealed in July show Cosby admitting in 2005 to carrying on extramarital relationships with several women, including some who accuse him of sexual assault. The testimony added to the unsavory details that have all but wrecked his nice-guy reputation as TV’s Dr. Cliff Huxtable and made a mockery of his preaching about decency and personal responsibility.