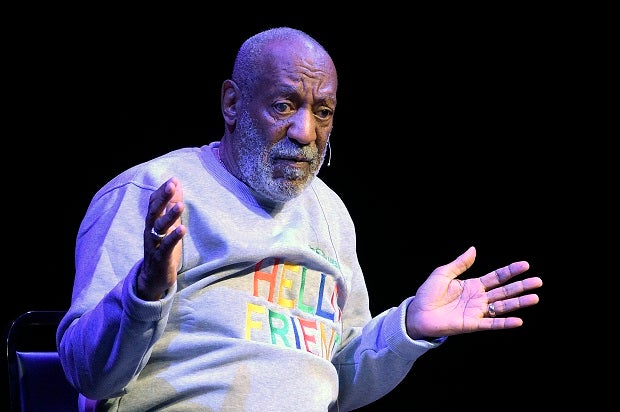 In this Friday, Nov. 21, 2014 file photo, comedian Bill Cosby performs at the Maxwell C. King Center for the Performing Arts, in Melbourne, Fla. Cosby detailed his efforts to keep his exploits from his wife in a transcript of a 2005-06 deposition taken in Philadelphia. It is the only publicly available testimony he has given in response to accusations he drugged and sexually assaulted dozens of women over four decades. Cosby has denied the allegations, calling the sexual contact consensual. AP Photo

Lisa Christie, Pamela Abeyta and Sharon Van Ert spoke at a new conference in Los Angeles, tearfully recalling their encounter with the disgraced comedian and how he allegedly abused them.

READ: No charges for Cosby over decades-old sex claim

They join dozens of other women who have come forward in recent months claiming sexual abuse by the TV legend.

Christie, a former Mrs America, said she met Cosby when she was an aspiring actress aged 18 and for two years he flew her back and forth to New York city and Buffalo but never tried anything as “he knew that I was a virgin and raised Christian.”

But then, she said, the comedian tried to pressure her into having sex.

She said when she refused his advances, Cosby warned that she would never make it in the business unless she slept with him.

“I responded ‘shame on you Mr. Father Figure of America’, your kids are older than I am,” Christie said.

Abeyta said she met Cosby in 1975, when she was 25 and hoping to appear in Playboy magazine.

She said Cosby invited her to Las Vegas where she stayed in a separate bedroom at his penthouse hotel suite.

She said she believes someone put something in her drink when she attended a show with Cosby and his friends. Abeyta said she passed out at some point and woke up in the comedian’s bed.

Van Ert said she met Cosby when she worked as a waitress at a California jazz club in 1976 and he offered to walk her to her car one day.

She said she remembers Cosby “getting fresh” with her and rubbing her leg before she passed out.

“The next thing I remember was waking up in my car, my head hanging down from the seat, alone,” she said. “I knew I was drugged because I threw up and I never threw up or drank too much.”

The women’s testimony at the offices of celebrity attorney Gloria Allred comes just a week before the disgraced comedian is set to give a deposition in a separate sexual assault case.

That case involves a woman who alleges Cosby sexually assaulted her at the Playboy Mansion in Los Angeles when she was 15.

Allred, who is also representing the woman, said she is fighting a motion by Cosby’s attorneys to prevent public release of the deposition.

Cosby’s attorneys have repeatedly denied any wrongdoing by the 78-year-old comedian who went from megastar to pariah over allegations of sexual assault spanning four decades.

READ: Cosby said he got drugs to give women for sex

In a deposition in 2005, Cosby admitted that he used sedatives to lure at least one woman into having sex.

The statute of limitations prevents most of the women who have accused the comedian of sexual assault from taking legal action.

Read Next
Caitlyn Jenner escapes charges over deadly car crash
EDITORS' PICK
Geek out at TOYCON 2022 powered by Smart Signature
High inflation: Your P1 is now worth only 87 centavos
High-risk pregnancy: Reducing your risk is in your hands
Unemployment rate up to 6% in May
House energy committee chair Arroyo bats for cheap electricity
Bye bye Boris: UK PM Johnson bows out with regrets but no apologies
MOST READ
Suspect in grisly killing of missing woman in Bulacan arrested
Kim Atienza’s daughter flaunts bikini body in response to critics of her ‘revealing photos’
Bongbong Marcos’ first order: Abolish PACC, Office of Cabinet Secretary
Ex-Defense chief Lorenzana is the new BCDA chair
Don't miss out on the latest news and information.