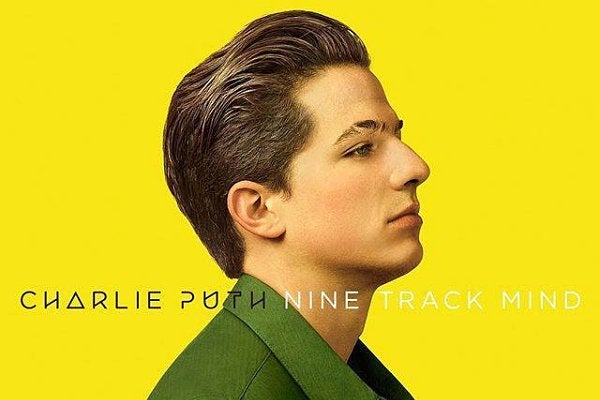 Nine Track Mind is available now for pre-order at http://smarturl.it/NineTrackMind, with all orders accompanies by an instant grat download of Puth’s brand new single, “One Call Away.” The track is streaming now at https://youtu.be/GRy3e_VRYHo  and http://smarturl.it/OCAspotify; a companion video is now in production and will make its premiere in the coming weeks. In addition to “One Call Away,” fans will also get instant downloads of “Marvin Gaye,” featuring Meghan Trainor, “Some Type of Love” and “Suffer” when they pre-order the album starting today (see full track listing).

Puth is also seeing success with his current hit single “Marvin Gaye” feat. Meghan Trainor, which is featured on Nine Track Mind and made its debut on Puth’s recently released Atlantic Records debut EP Some Type of Love, available now at all DSPs. “Marvin Gaye” recently debuted at No. 1 in the UK and Ireland and is climbing charts globally. The song is accompanied by a fun and racy companion video, with more than 39 million views thus far at Puth’s popular Youtube channel. In addition, Puth and Trainor performed a knockout rendition of the song on the Today show.

As if that weren’t enough, Puth recently teamed up with Lil Wayne for “Nothing But Trouble,” the blockbuster new single from Big Beat Records’ hugely anticipated soundtrack for 808, the landmark documentary chronicling the incredible story of the influential Roland TR-808 drum machine. The track is available now at all DSPs and the lyric video can be viewed at https://youtu.be/ToqKv5go_WQ. Additionally, a companion video for “Nothing But Trouble” is currently in production and will be released soon.

A Berklee College of Music graduate, Puth has found himself among modern pop’s most in-demand co-writers and producers – recent credits include two tracks on Jason Derulo’s acclaimed new album Everything is 4, the R&B chart-topping single “Slow Motion” by Atlantic’s own Trey Songz, and further collaborations with Fergie and many more not yet announced. ADVT.