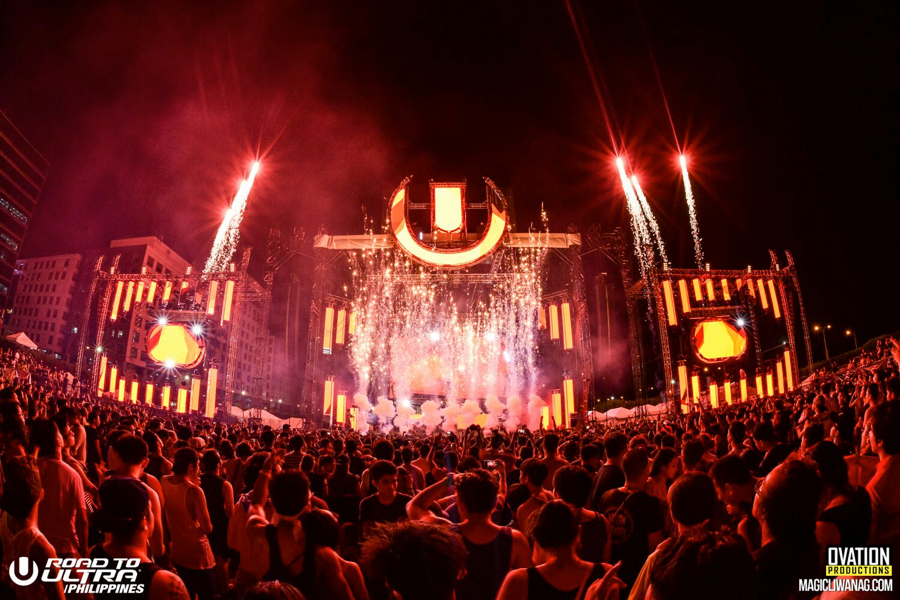 Avid fans of Electronic Dance Music (EDM) flocked to the SM Mall of Asia Concert Grounds on September 26, 2015, in attendance of the first ever Road to ULTRA Music Festival in the country, with partners Black Water and Ovation Productions. The two-stage spectacle featured headliner Skrillex, Fedde le Grand, A-Trak, W&W, Vicetone, Zeds Dead, Mija, and other local acts in a celebration of the genre.

Since the swift announcement of Road To ULTRA Philippines a few months ago, millennials and party-goers have been hyped up for a taste of what was announced to be “the party of the year,” and last Saturday, they got more than they bargained for. The EDM Festival climaxed unlike anything the Philippines has ever seen.

Gates opened as early as 3pm and EDM fans began rushing through. While both stages were setting up, a number of interactive booths and concessionaires kept the crowd well entertained. Local DJs took the main stage and started warming up the troops, with Ace Ramos accompanied by MC Paolo starting the sets, Tom Taus dynamically spinning along with an alternative drum act, and Justin Oh engaging Manila’s party set. The Smart stage included familiar names, among them Nix Damn P.

Newcomer and sole woman on the night’s deck, Mija brought in eclectic tunes as she stood on the turntable, coaxing everyone to make noise as flames arose from the front of the stage. She ended an hour in, promising to come back again soon with a brand new remix for Major Lazer, and the hoards chanted her name, a newfound favorite on their tongues.

Dynamic duo Vicetone gave their all and started out rehashing classic songs, all the while documenting the audience’s excitement with a GoPro camera. Another crowd favorite, A-Trak, reworked songs on today’s Top 100 list, paying homage to current greats Galantis and Calvin Harris with an infectious spin on ‘Runaway’ and ‘How Deep Is Your Love’.

Followers of the EDM genre bow down to Fedde Le Grand as one of its pioneers, spearheading the field with tracks like ‘Put Your Hands Up 4 Detroit and ‘Sparks.’ He spun with an electric energy that made everyone not only dance, but bounce to the beats of exclusive previews from upcoming works.

Zeds Dead took to the main stage for almost an hour and a half, with their tracks combining aspects of dubstep, house music, and drum & bass. All kinds of partyphiles showed up despite the heavy downpour and continued the non-stop dance party, supplied with refreshments from Miller Lite, Red Bull, and Bacardi. Afterwards, W&W spun their magic for another 90 minutes, enticing the excited audience to jump and dance along.

Late into the night, anticipation built for the man of the hour, Skrillex, to appear. The lights went out as the “Voice of ULTRA”, Damien Pinto, guided the crowd with assurance that the party was just about to start—and so it did when the stage exploded with bright lights and a pumped up Skrillex took over the deck. He pulled out all of the stops, everything the crowd was and wasn’t expecting: from Beyonce’s ‘7/11’ to Diplo’s ‘Boy Oh Boy’ to his very own tracks ‘Scary Monsters and Nice Sprites’ and ‘Bangarang’.

The crowd was hungry for his energy and he fed them with a hefty dose of dance-worthy tunes. “I want you to take your cellphone out right now and turn on that light,” he encouraged. Just as the swarm complied, his Grammy-winning rendition of Benny Benassi’s ‘Cinema’ blasted through the speakers and Mija joined him on deck. The track transitioned into Jack Ü’s ‘Where R Ü Now’, his final track of the night. A ton of confetti blasted as the track reached its bass drop and the two took one last photo with the raving crowd then Damien bid everyone good night.

Just like that, ULTRA ended as it started, with a bang.

The Road to ULTRA Philippines owes its success to the international and local acts, as well as the sponsors and partners, including Smart Communications, Miller Beer, Fox International Channels, Starworld, Channel V Philippines, Makati Shangri-La, and Thrifty Car Rental.

Road to ULTRA PHILIPPINES is brought to you by Black Water Events Management and Ovation Productions. Blackwater prides itself in bringing a number of international talents to the Manila clubbing scene while Ovation Productions promotes an array or genres of performances from Taylor Swift to Sting concerts to Broadway musicals such as Beauty & the Beast. Ovation is the first concert promotions company that directly buys, promotes, and handles all production aspects of its concerts. They have expanded since 1979 and have been bringing in international artists to perform in the Manila, as well as other provinces. Follow @ovationprod on Facebook, Twitter, and Instagram for more information about The Road to ULTRA and other productions. ADVT.