‘The Normal Heart’ on very limited rerun for 2 weekends 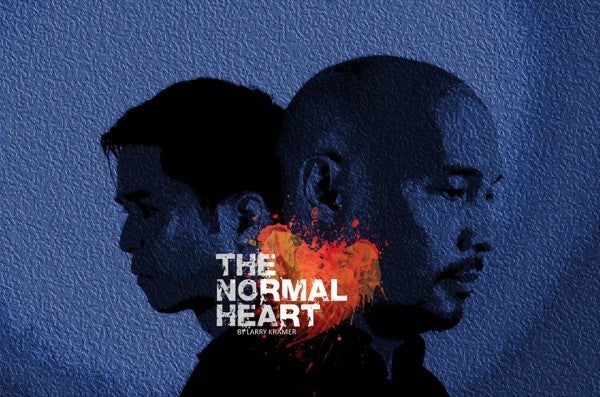 The recent, very-limited run Larry Kramer’s “The Normal Heart” by the Necessary Theatre was called “important,” some critics hailing the quality of its acting, its direction, and design. It drew raves from a very wide spectrum of audiences, theater-goers and non theater-goers alike.

But for all the praise garnered for different aspects of the production, the two most common sentiments were: 1. How the play has awakened the viewer to the HIV crisis in our own country and 2. A real clamor for a repeat of the show.

In 1981 in New York, a mysterious disease was ravaging a very specific, very “specialized” demographic: gay men. It aggravated deep-seated feelings of hatred and festering bigotries against, and even within the ranks of its victims. The confusion, chaos, panic and paranoia could have been a scenario from a b-grade disaster movie except that the crisis was very real and very frightening. No cause for the fatal illness was yet known, no strategies for prevention, no cure remotely in sight.

One doctor understands that the disease is transmitted sexually. She recruits a writer with a reputation for abrasiveness to combat the epidemic in two ways. First, he noisily clamors, if almost singlehandedly, for action against City Hall and the Health Department; and then fights against his own community,– the gay community– to convince its members to cease all sexual activity among themselves.

The story could have been a modern adaptation of Ibsen or Odets because it bears all the hallmarks of classic agitative theatre. It is also, apart from that, a poignant love story and a medical thriller. But Larry Kramer’s play The Normal Heart is anything but fiction. It is an autobiographical account of its author’s lonely struggle to provoke his government into action and to save as many lives as possible even if it meant losing friends, alienating family and making enemies along the way.

It was staged to wide acclaim in 1985 and hailed an instant classic. Its revival in 2011 was showered with prizes and once more, wide acclaim. It hit the mainstream with a highly celebrated award-winning HBO adaptation starring some of Hollywood’s biggest stars. It has also been listed as one of the 100 most important plays of the 20th Century by London’s National Theater.

Flash forward to 2015 Philippines. The rise in HIV cases is now officially the fastest in Asia and among the fastest in the world. The same indifference greets the victims and their supporters as it was in 1981 New York, because the disease is looked upon as a “fringe” disease that might affect only those living in society’s margins.

Many ignorantly look upon it as a “gay disease,” God’s punishment upon homosexuals even if the vast majority of its worldwide victims, mainly in Sub-Saharan Africa, are heterosexual.

Mainstream media, in a feeding frenzy, reports on the MERS CoV virus on a daily basis, almost always on the front pages when there isn’t a single case yet recorded in the country. HIV, on the other hand is now infecting at a rate of 22 people a day and is still largely ignored. 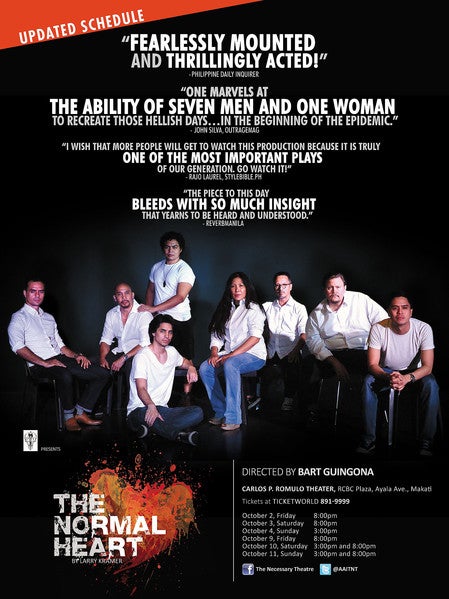 Enter The Necessary Theatre and the 2015 Philippine Production of Larry Kramer’s inflammatory “The Normal Heart.” While the staging will stick to the play’s original setting of New York City, the material will be treated as cautionary, something that might be instructive to our own country, something that might make us respond with some wisdom to our crisis, which mirrors New York in 1981.

“The Normal Heart” makes is produced with special arrangement from Samuel French Inc.