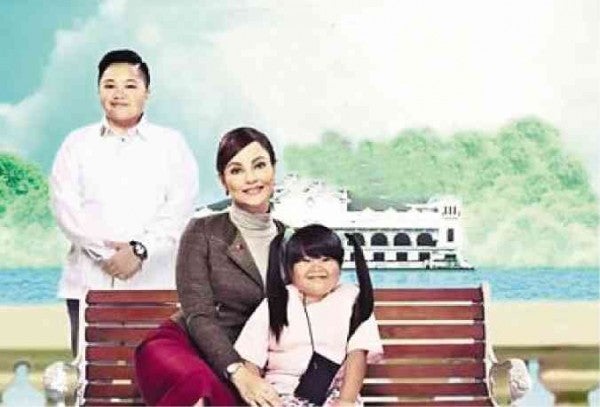 That’s right, the country’s masa sensation now plays an “ordinary” kid who ends up getting involved with—no less than the president of the Philippines, at Malacañang Palace!

This extraordinary confluence of events and unlikely mix of key players is the unique plotting and thematic “engine” that makes the new daytime series a promising show.

Adding to the show’s chances of success is the astute casting choice of Eula Valdez as the country’s female president, plus other regular cast members like Aiza Seguerra, Boots Anson-Roa, Dante Rivero and Marc Abaya.

The fact that Aiza and Ryzza are costarring in the new teleserye is significant, because they’re both products of “Eat Bulaga’s” “Little Miss Philippines” competition, many years apart.

In fact, Ryzza is being billed as “the new Aiza,” and has become as successful as her ate.

Our initial notes on the new daytime drama series: Its thematic possibilities are interesting, in the light of how the country’s top official ends up getting personally involved with Ryzza’s character, with both of them benefiting in different ways from the experience.

The president’s character is made vulnerable to her little friend’s soothing friendship due to the fact that her relatives give her precious little of that, and even use their link to her for ulterior motives.

She confesses to her closest aide, played by Aiza, that she’s lonely and unhappy, so Ryzza’s eventful presence in her life is what she needs to feel appreciated and loved.

On point of performances, Eula makes a credible chief executive who truly wants to serve the people as best she can. However, the series’ production values aren’t authentic-looking enough to make viewers feel that she’s really in a position of great power and importance.

She thus come off more like a generic female executive than the top leader of the land, and that makes it more difficult for the actress to fully vivify the character she’s assigned to portray.

For Ryzza’s part, she launches into her acting scenes with gusto, but she still looks like she’s acting, instead of being the character she plays.

Granted, it isn’t easy making the shift from program host to a performer playing somebody else other than herself, but Ryzza has to make that key shift, otherwise viewers won’t be able to fully believe in and empathize with her portrayal.

It’s a shift that Aiza has managed to make beautifully and credibly, which is why she’s become one of the best young character players we have.