‘Why is Mabini just seated?’ Epy Quizon stands up to the confused | Inquirer Entertainment

‘Why is Mabini just seated?’ Epy Quizon stands up to the confused

Quizon, who portrays national hero Apolinario Mabini in Jerrold Tarog’s acclaimed historical epic, recently shared on Facebook that a group of college students had asked him why his character was sitting down throughout the movie.

He wonders: Do they even know Mabini?

(What are kids being taught in their history classes today? A group of college students approached me and asked me why I was always sitting down [in the movie]. My question … don’t you know [Apolinario] Mabini?) 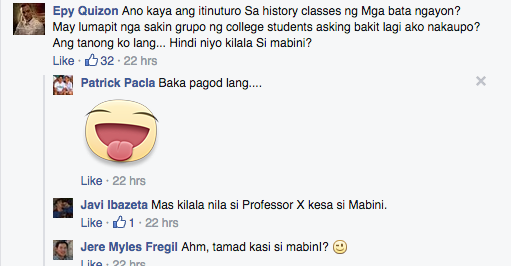 Epy Quizon reacts to the question on why Mabini was seated during the entire movie. SCREENGRAB FROM QUIZON’S FACEBOOK ACCOUNT

Some netizens weighed in on the actor’s comment, joking that Mabini may just have been tired or lazy.

Mabini, highly regarded for his intellect, served as the country’s first prime minister and minister of foreign affairs and as an adviser to President Emilio Aguinaldo. He is referred to as the “Brains of the Revolution.”

Despite his disability, he continued serving the Philippines in his capacity as a government official and negotiated the country’s independence with the United States. With the talks failed, he supported war against Americans and was subsequently exiled to Guam in 1901.

Despite his puzzlement, Quizon thanked everyone who watched the film.

“We have been receiving much gratitude and praise for the success of ‘Heneral Luna.’ I just want to say that it is you guys who should be receiving the biggest Thank you from the bottom of our hearts… Thank you for choosing to be part of this revolution… and to the netizens who voiced out and stood side by side with us… [I] salute you all… Viva Revolucion!!!” he said.

Heneral Luna is now on its third week in cinemas and has been picked as the country’s entry to the Best Foreign Language Film category of the 2016 Oscars. AJH/IDL