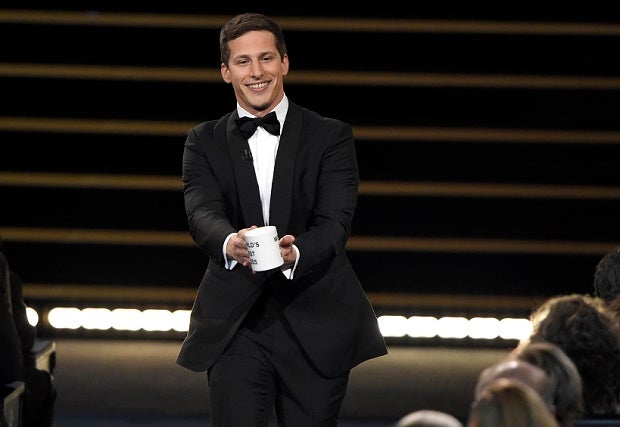 Host Andy Samberg prepares to present a coffee mug to Lorne Michaels at the 67th Primetime Emmy Awards on Sept. 20, 2015, at the Microsoft Theater in Los Angeles. AP

NEW YORK, United States — And the winner wasn’t the Emmys — at least, when it came to the viewership.

Last year, when it aired on a Monday in late August on NBC, it logged 15.6 million viewers. In 2013, 17.8 million viewers tuned in for CBS’ broadcast, teamed with an NFL game as a powerful lead-in.

This year’s Emmy show likewise had football as a lead-in. But the Emmys faced football as direct competition, too, thanks to NBC’s Sunday Night Football, which doubtless dragged down the Emmy audience.

The program, airing from Los Angeles’ Microsoft Theater, was hosted by Andy Samberg.