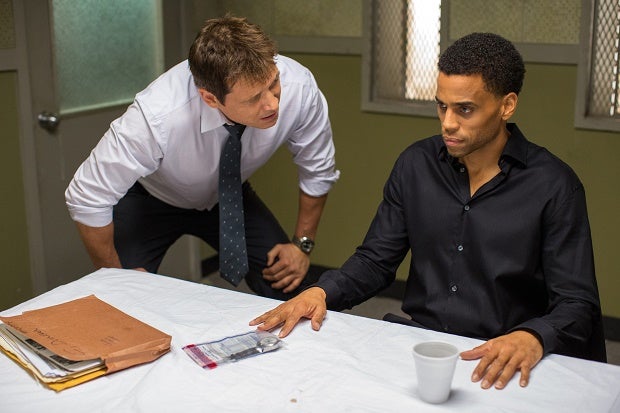 The film makes it the fifth weekend in a row that a movie with African-American lead actors topped the box office chart, after faith-based drama “War Room” last week and NWA biopic “Straight Outta Compton” the three previous weeks.

Second place went to another new thriller: horror flick “The Visit,” about two children who discover a shocking secret when they go visit their grandparents for the first time. It made $25.4 million.

“War Room,” about a troubled couple that finds help through prayer, dropped from first to third place as it took in $7.7 million.

Ranked fourth was “A Walk in the Woods,” with Robert Redford and Nick Nolte, at $4.7 million.

Based on a book by writer Bill Bryson, the film dramatizes his homecoming hike along the Appalachian Trail with an old friend, after a long absence from America. Last week it came in third.

“Mission Impossible: Rogue Nation,” the heart-pounding Tom Cruise vehicle, stayed in fifth place as it pulled in another $4.1 million during its seventh week in theaters, for a cumulative gross of $188.1 million.

In sixth place with $3.9 million was “Straight Outta Compton,” a biopic about the pioneering rap group NWA. It had held first place for its first three weeks on the big screen and was second last week. Its cumulative total over five weeks is $155.5 million.

Seventh place went to “No Escape,” which posted $2.9 million in sales. The expat adventure film stars Owen Wilson as a father trying to save his family in the middle of a foreign country’s political uprising.

Dropping from fourth to eighth in the charts was action thriller “Transporter: Refueled,” by French director Camille Delamarre, which made $2.8 million during its second weekend.

“90 Minutes in Heaven,” based on the true story of a pastor’s near-death experience after a horrific automobile accident, came in ninth in its debut weekend with $2 million.

Neighboring Mexico’s “Un Gallo con Muchos Huevos” (A Rooster with Many Eggs), a Spanish-language animated feature, pulled in just over $2 million in ticket revenue as it finished tenth.

In its second week, the 3D film about a little rooster that fights a mean rancher is being shown in its original Spanish with English subtitles and has had little advertising in North America.

The United States has more than 40 million Spanish speakers—close to the entire population of Spain (48 million).