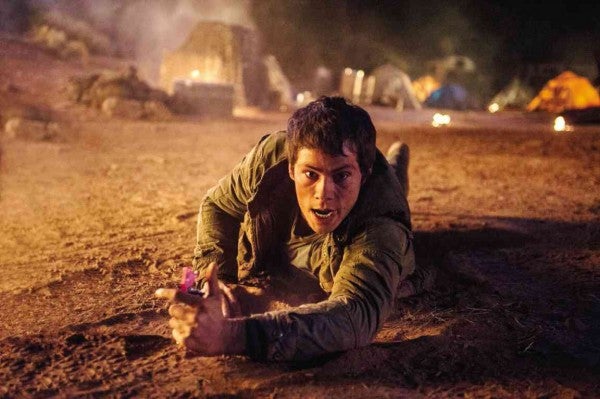 O’BRIEN. On the run again in “The Scorch Trials.”

Just when they think they’re done running, the surviving Gladers, led by Thomas (Dylan O’Brien), suddenly find themselves on the run again: Wes Ball’s “Maze Runner: The Scorch Trials” expands the mythology of the beleaguered young group by letting them hop, skip and scurry away from the mysterious forces running their dystopic world!

The battlefields are less confined (and confining), but there are more pursuers to ward off—and we’re not just talking about the manipulative people behind the World Catastrophe Killzone Department (WCKD), responsible for their do-or-die survival challenges in the maze.

The scientific think-tank is trying to find a cure for the Flare virus that is turning people into bloodsucking zombies called the Cranks, and wiping out humanity. WCKD’s leaders think that the antidote they need can be extracted from the blood of the teenagers who are inexplicably immune to the disease!

Earth has become a barren wasteland populated by Cranks, government operatives running controlled enclosures—and a band of rebels who are fighting for a better way of running the planet—or what’s left of it!

Outside the maze, the world is a darker and gloomier place—with scenes guaranteed to scare the bejesus out of viewers. But, away from the reach of the movie’s ravenous iterations of creatures from “The Walking Dead,” the production’s thrills and chills are for the most part fleeting and episodic—not the type that linger in your mind after the closing credits roll.

This installment of the popular Young Adult fiction has its moments—not the least of which are gorgeously photographed sequences that reveal the scope and magnitude of destruction born out of man’s carelessness and disregard for the world he lives in.

The film often relies on colorful characters who betray their friends, but don’t do much to push its long-winding exposition—as well as revelations that feel more staged than spontaneous.

As a result, the element of surprise is compromised. Its sections aren’t cohesive enough to sustain moviegoers’ interest, while some action scenes lack the urgency required to keep viewers on the edge of their seats. The movie diverts more than it involves—and, this sequel being based on only the second of many books, it raises more questions than answers.

The first film kept its target audience riveted by way of the claustrophobic conceit running its thematic engine. This time, however, more characters are utilized to keep the franchise’s dramatis personae merrier and more eventful—but, not necessarily scarier!