Garfield talks about working with Scorsese 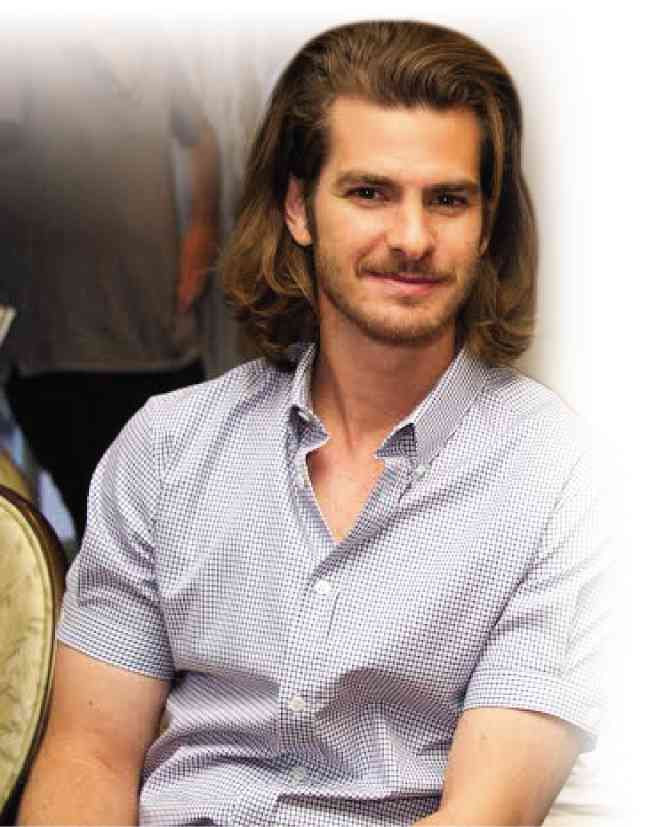 ANDREW Garfield’s goal is to live a life of truth, sincerity and authenticity. Ruben V. Nepales

LOS ANGELES—Andrew Garfield has finished shooting a film, “Silence,” with no less than Martin Scorsese in Taiwan. He plays a single dad in a new movie, “99 Homes.” And he’s about to be directed by Mel Gibson in “Hacksaw Ridge.” Yet, something else almost eclipsed these interesting developments—Andrew’s Tarzan-like hair.

The flowing locks, beard and mustache make him look completely different from his clean-cut Spider-Man/Peter Parker days. Maybe that’s why he’s keeping the long hair even though he’s done playing a 17th-century Jesuit priest facing persecution in Japan (Taiwan subbed) in Scorsese’s history-based drama, and even if the scene-stealing hair requires high maintenance. “Yeah, a lot of care and a lot of conditioner and hair spray,” Andrew agreed with a laugh.

In director Ramin Bahrani’s drama “99 Homes,” Andrew’s debt-riddled Dennis Nash character, his son (Noah Lomax) and mother (Laura Dern) are evicted from their home by Michael Shannon’s real estate tycoon, Rick Carver. The film’s story on the dirty business of foreclosure and forcing people out of their homes and into the streets steered our chat into the culture of greed and ruthlessness of business and politics.

At 32, Andrew, who was born in the United States but raised in the United Kingdom, is articulate and deep. He is dating Emma Stone.

The following are excerpts from our chat.

How do you feel about what Michael Shannon’s character says in the movie, in essence, that America is taking advantage of people with misfortunes?

I think it’s a true thing. My experience is that the rich do get richer and the poor do get poorer. People are rewarded and what comes to mind is the big boxing match that happened a while ago, the Floyd Mayweather Jr./Manny Pacquiao fight. I love watching any sport but the excess, greed and the gross waste of resources that were on display during this event of the year—the gold and blaring lights…

And who are we celebrating in our culture? We are celebrating a man (Mayweather) who beats his wife and we are giving hundreds of millions of dollars to the man who is telling young kids subliminally that this is what success looks like—excess and greed and I am never going to have enough. I am never going to be big enough. It’s a rotten state of affairs and it’s scary. It scares me.

So what is success to you?

To find what specific work we are supposed to do is hard, especially when the culture is telling us, don’t be yourself, be this.

He has spent lots of time in Nepal. On their walls, they write prayers for all sentient beings in the world. On our billboards, we have naked teenagers. That is the difference. That is the culture we have created. We are celebrating naked teenagers—teenagers in their underwear.

This film has political themes. Are you engaged in politics?

I struggle with the world of politics, specifically because I care about the world. I really care about people, humanity and living. I want to live a life of truth, sincerity and authenticity.

This film is a great opportunity to show a new side of you. What drove you to accept this project?

I wasn’t thinking, oh, here is something for me to explore. It was more, this is a story that I want to be part of. It’s very rare to come across a story in script form where you go, oh this is so much bigger than me and so much bigger than any career move. It just feels like a really important story for Americans to bear witness to right now and to know. Because we are all participating in a system that is not serving us in a lot of ways.

Those who do have the wealth and power are being served, I believe. They are being separated and kept away from the community. Those who don’t have the wealth and the power are most definitely not being served. I got to page 30 where the Nash family was evicted. I instinctively felt like I knew what that was even though I had never been through something so horrific.

This film shows what wealth can do. If you don’t have it, you can lose your home or your life. What does wealth mean to you?

But what was it that Jesus said? “It’s easier for a camel to go through the eye of a needle than for a rich man to enter the kingdom of God”?

In talking to Scorsese about this, it was wonderful because now he is a mentor, an elder of our community in the sense that he is mentoring young filmmakers across the board. Mike Nichols was this way as well. He was one of my mentors and someone so dear to my heart.

I am not. I do carpentry as a hobby. In my world as an actor, there is not much solid stuff to hold onto. My grandfather was a carpenter. I am not very good at carpentry but it’s something that is very soothing to me. Just making gifts for people is better than buying things.

What kind of carpentry do you do?

I have only made a few things. I started small. I made a jewelry box and then a coffee table. The most recent thing I made was a rocking chair. That was a proud moment. I started whittling wood into things like little sculptures, like birds and animals. It’s just silly hobby stuff but it’s lovely.

Michael Douglas once said that he wanted to be an actor to meet girls and to get a nice table at restaurants.

I wish I had as charming a response as that.

I am very earnest about acting. As a teenager, I was very lost as most teenagers are in the school system. I just couldn’t figure out… what I was supposed to be doing until I did my first school play. Suddenly, I felt like, in my body, a semblance of joy and purpose.

I am 32 now. I started when I was 21 so over the course, the first impulse had a lot to do with egotism and being seen, getting attention from women predominantly. That’s superficial. Michael Douglas was being charming, sweet and funny about it.

What did you learn about religion from playing a Jesuit priest in “Silence”?

Oh gosh, a lot. I spent a year working on that with the director (Scorsese) and with a Jesuit priest in New York City guiding me, taking me through the spiritual exercises and developing my own spiritual life. It was really a very beautiful period of time. I got to experience great personal development.

What was it like, being on location in Taiwan, which subbed for Japan?

The whole landscape of that country is just beautiful. The coastline is gorgeous. The mountains are just stunning. It was a beautiful place to be. We shot mostly out in the wilderness.

He is 72 but he’s still like a kid in terms of his vitality and the energy he brings. He is still wrestling with everything in his life and himself. He wanted to be a priest when he was a teenager. Thank God that he became the person that he is in film. So he had a lot of desire to make this film. The themes of the film are those that I believe he has struggled with all of his life.

Can you talk about starring as a superhero in two films and holding on to who you really are?

It takes a lot of work and energy to, as you say, hold on to who you are and not be pushed and pulled.

Because the objective with those movies is to appeal to every single demographic, to be liked by every single human being on the planet in order to make tons of cash and win.

It’s an exhausting goal to try and get everyone to love you. It’s not a possible thing. It can really tear you and stretch you in a really unhealthy way.

There’s this idea that maybe those films perpetuate… [something that] isn’t true—that one person is going to come and save the world. But in fact, it’s going to take everybody to bring their personal uniqueness, their personal genius, wounds and gifts to change the world and save it from itself.

What philosophy do you live by?

I am still putting that together. I like the idea that next to our deepest personal wounds are our gifts. I get to use it (my sensitivity) in… hopefully creating something meaningful.

I also like the idea that everyone is a genius, that this word “genius” has been misinterpreted and given only to Albert Einstein, Carl Jung, Sigmund Freud, Jay-Z and Beyoncé (laughs). They are geniuses but so is everyone.

In 10 years, how would you like your world to be?

At this moment, I don’t know and I am willing to not know.