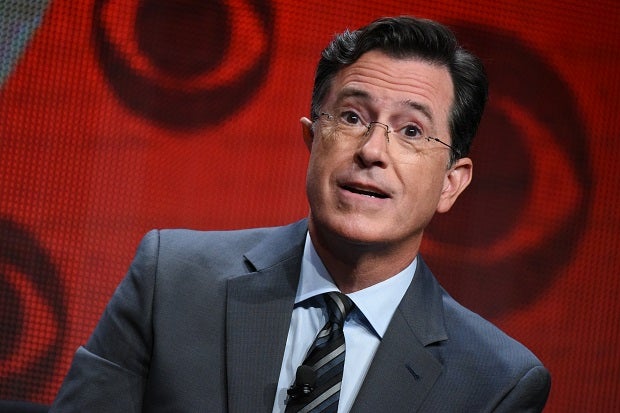 In this Aug. 10, 2015, file photo, Stephen Colbert participates in “The Late Show with Stephen Colbert” segment of the CBS Summer TCA Tour in Beverly Hills, Calif. Colbert officially takes over for the retired David Letterman as host of “The Late Show” on CBS Tuesday, Aug. 8, 2015. AP Photo

NEW YORK, United States—He’s an American comedian who already has inspired an ice cream flavor and has a spider named after him. But Stephen Colbert hits the big time Tuesday when he formally succeeds David Letterman at “The Late Show.”

The 51-year-old Colbert will shed the ultra-conservative, alter ego news-cast character that popularized him at Comedy Central and step into the shoes of one of America’s biggest television legends, Letterman, who retired this summer after a 33-year career.

His first guests are Hollywood hunk George Clooney and flagging Republican White House contender Jeb Bush, a signal of perhaps a focus on political comedy as the nation navigates the 2016 presidential election campaign.

Colbert joins a fiercely competitive market, where America’s beloved world of late-night television is vastly different from the golden age dominated by the likes of Letterman, Jay Leno and Johnny Carson.

He will have to hold his own against the Jimmys: Jimmy Fallon on NBC’s “Tonight Show” and Jimmy Kimmel on ABC’s “Jimmy Kimmel Live!”

Audience figures are down, young people watch less and less television, and part of the two Jimmys’ success has been producing clever segments that go viral on the Internet.

He has trickled out video segments during the summer, topped by previewing his interview with Bush, Republican establishment favorite who has tanked in the polls under constant attack from frontrunner business mogul Donald Trump.

Vice President Joe Biden, who is mulling a run against Hillary Clinton for the Democrat nomination for the White House, is booked for Thursday.

In an interview with The New York Times, Colbert also hinted at hopes that his aptitude for political comedy would give him an edge over his rivals in election season.

“This is the fifth presidential election I’m covering in late night. It happens to excite me on a level that it may not excite other people,” he told the newspaper.

“The nice thing is that the story doesn’t really get old. People care, every day. It’s the biggest story in the world and nobody dies. What could be better than that?”

Colbert has already shown on Comedy Central that underneath his Catholic family persona, he is one of the most biting comics on American television.

By adapting to an Internet audience, the networks have repositioned themselves in a shifting media landscape.

The set and set-up are sacrosanct: the guest’s chair before the audience and the traditional starting monologue from the host.

Apart from the exception that was Arsenio Hall, a black talk show host between 1989 and 1994, the big evening hosts have all been white men.

Trevor Noah, a South African comic who has a black mother and a white father, replaces Jon Stewart as host of “The Daily Show” later this month.