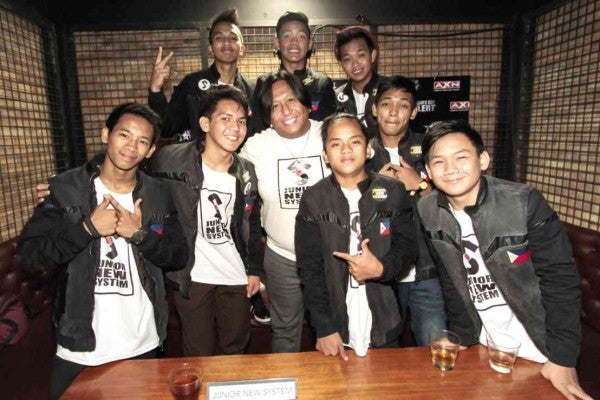 THE PAST three months have been hectic for Junior New System (JNS), and it looks like things won’t be letting up soon.

Since the hip-hop crew returned after the finals of “Asia’s Got Talent” (AGT) in May, the guys have been performing all over the country.

The crew had just arrived from a gig in a resort in Mindanao when it performed at the recent “Viber #JuanVibe: Gimik ng Bayan” event at SM Megamall.

But the JNS boys are not complaining. “The difference between before and after ‘Asia’s Got Talent’ is we can buy anything now,” JNS member Philip del Mundo told the Inquirer in Filipino.

Even in the heat of the AGT competition, they could already feel something good resulting from their efforts. Crew member Eugene Fabon was hopeful that the show would help them improve their lives. “We can help our families… Our parents will no longer have to worry about how to provide for us,” he said.

Although the AGT grand prize went to fellow Filipinos of the shadow play group El Gamma Penumbra, JNS did not feel defeated.

Marcial Visda, JNS’ manager and choreographer, pointed out: “We may not have received the grand prize, but it feels like we are champions. Almost every day we perform in government, corporate or private events. We are truly blessed.”

Junior New System’s dance style has been described as “hip-hop on steroids.” For the Megamall stop of the #JuanVibe mall tour, it did one of its most memorable performances in “Asia’s Got Talent”—dancing in four-inch heels!

Hordes of pumped up fans screamed as the JNS boys put on their fierce faces. The music blared as the dance crew tumbled, did splits and 15-foot somersaults. They made multiple backflips in heels look easy.

A group of coaches helps ensure the safety and well-being of the JNS crew when it does its very risky moves. Visda elaborated: “We have professional coaches from Club Gymnastica who teach us gymnastics techniques. We are also an adopted group of the Halili Cruz School of Ballet. They teach us different dance styles, aside from ballet, which we then incorporate into our performances.”

He added, “We are the only male group in the entire Philippines that can dance hip- hop in high heels.”

Van Ness Wu, an AGT judge and a former member of the boy band F4, is a self-proclaimed fan of JNS. Himself a hip-hop dancer, Wu told the group during the AGT competition, “For me, you don’t need the shoes. You’re amazing as is. I love you, guys!”

The group will perform in another #JuanVibe: Gimik ng Bayan stop. Fans can follow #JuanVibe on Viber Public Chats (www.viber.com/viberph) or on Twitter (@ViberPH). The tour also features Jhong Hilario, Itchyworms and Rocksteddy.