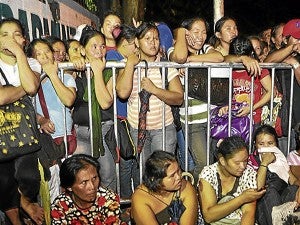 ANXIOUS AND HOPEFUL FACES all in a long long gray line outside the Amoranto Stadium in Quezon City. They have all descended upon what they hope to be their launch pad for the big time and the big bucks. ARNOLD ALMACEN

They skipped work. They rehearsed their dance moves. And then they came, camped out for hours and hours, and courted another game-show disaster.

Frustrated crowds outside the Amoranto Sports Complex in Quezon City posed security and sanitation nightmares for authorities from Thursday till press time on Saturday, as they clamored for one of the prized free tickets to a show by controversial host Willie Revillame.

Tempers flared and the jostling only worsened when word got out that all tickets had been given away as of Friday afternoon, one day earlier than the schedule announced by Revillame on his TV5 show “Will Time Big Time.”

The tickets—for many a ringside chance to win big prizes and get instant relief from poverty—were for the show’s first anniversary bash on Oct. 22 at the Araneta Coliseum.

Prizes include P7 million cash, 10 cars, and three houses and lots courtesy of Sen. Manny Villar. Along with the free tickets, each is given P1,000, a bag of groceries and 5 kilos of rice.

On Saturday’s episode of “Will Time Big Time,” Revillame apologized on camera to those who weren’t able to get tickets. “Pasensya na po kayo. Sana po maisipan natin ng paraan para magkasama tayo (Please be patient with us. Hope we could still find ways for us to be together).”

Revillame did not say why the tickets were released a day before the date he had announced, which was Oct. 15.

The chaotic scene almost had the ingredients of another “Ultra stampede,” the February 2006 tragedy that marred Revillame’s previous show “Wowowee” on ABS-CBN, in which 71 people died, mostly elderly women, and hundreds were injured in a mad rush to get inside the venue in Pasig City.

Crowd estimates at Amoranto ranged from as high as 45,000 on Friday to 5,000 as of early Saturday. At least 17 people were rushed to the hospital after they fainted due to the heat, exhaustion and hunger, police said.

The place was still ripe for bedlam as of Saturday morning.

Despite announcements from security personnel manning the stadium gates that no more tickets would be given away, the air still simmered with nervous anticipation, the crowds raring to get their hands on a prized piece of paper that could spell instant fortune for their families.

“We will not go home!” they yelled, particularly after rumors went around that the show organizers still had around 8,000 tickets to release.

“They might start giving away tickets again when the crowds have thinned out,” said Mary Anne Jongay, a 37-year-old housewife from Caloocan City. Otherwise, she said, “uuwi ako na luhaaan (I’ll be going home in tears).”

“How can I go home if I don’t have money for my fare!” said a fuming old woman. “I’ve been waiting for a ticket and now they tell me they’ve given it all away! Does Willie (Revillame) know what they have done?” she said.

A mere creaking sound from the Amoranto gates would send the people cheering or making a run for it in the thought that the ticket distribution had resumed. But to their disappointment, the gates were being opened simply to let vehicles out of the complex.

In a text message sent to the Inquirer, Perci Intalan, TV5 vice president and head of its creative and entertainment production, said “WilProductions has released all the tickets allowed for the show at the Smart Araneta Coliseum” on Friday.

Those who trooped to Amoranto as early as Thursday night, camping out and ready with packed meals, managed to get tickets.

Those who came in later, like Gemma Pili, said “we were made to hope for nothing.”

Pili, 35, a bread factory worker from Biñan, Laguna province, said she didn’t report to work for the past two days just to try her luck at Revillame’s show, where she said she could win cash or a house and lot showcase.

“I even borrowed P300 for my transport fare to get here, but nothing happened,” she said. “To think that I and my six friends rehearsed our dance moves (nagpakendeng-kendeng) just so we would not get embarrassed in case we’re called to the stage.”

Magdalena Pabalan, a 59-year-old farm worker from Baliuag, Bulacan, said she stayed put outside Amoranto with nothing but water in her stomach, and that she lacked money for the ride home.

As of Saturday, the streets around the complex—Scout Chuatoco and Alejandro Roces—already reeked of urine and were strewn with trash and leftover food.

Some people tried to catch some sleep on the pavement, seemingly oblivious to the stench and the smoke from passing cars.

A nearby eatery charged P5 a person for the use of its toilet—but apparently not everyone was willing to shell out that much.

According to Jongay, the conditions were much worse the night before: “There were more people. We could hardly breathe. I saw at least six people collapse.”

Around 5,000 people were still waiting for tickets at Amoranto as of Saturday morning—with around 100 policemen keeping watch.

“We told them that there’s no use waiting because there’s no more tickets. But they won’t listen,” said Al Arellano, an officer at Quezon City’s Department of Public Order and Safety.

The Quezon City police met with the show’s staff twice last week to coordinate the security details, the Inquirer learned.

But while most of the people cursed and grumbled, Aida, a 58-year-old housewife from Taguig, kept her cool, knowing that the situation could turn into another Ultra stampede if hotheads prevail.

She cautioned those blaming Saturday’s mess on the game show host, Revillame. “Perhaps Willie had nothing to do with the release of the tickets,” she said.

Despite her frustrations, Aida said Revillame remained her idol because of his “generosity, especially toward the poor.”

“He gives to the people to the max, even off-camera,” she said. “You can even see him drawing cash prizes from his own wallet. You can see that on TV.”

“He’s only human; he makes mistakes and can’t please everyone,” Aida said. “But look, all these people who are mad at him now would still try their luck by going straight to the TV5 studios.” With Inquirer Research