Apl.de.ap to kids: We can be anything 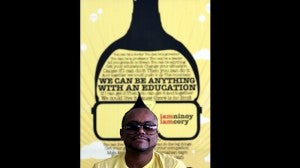 Apl.de.Ap, the Filipino-American member of the American hip-hop group Black Eyed Peas, poses during a press conference on the launching of an education advocacy campaign which he leads Saturday, Oct. 15, 2011 in suburban Pasay City, south of Manila, Philippines. The "We can be anything!" education advocacy campaign seeks to build more classrooms to fill the 66,800 backlog. AP

MANILA, Philippines – “Get an education, change your situation. Get your graduation, earn your occupation.”

The lines come from apl.de.ap of the well-known American band Black Eyed Peas in a new song titled “We Can Be Anything,”complete with a music video, that kicks off a campaign to build 10,000 new classrooms in the next two years.

Apl.de.ap, or Allan Pineda Lindo Jr. launched his new advocacy for education on Saturday, urging Filipinos, including Filipino-Americans like him and others from all over the world, to help Filipino schoolchildren “to go to school and stay in school.”

“I am proud to be Pinoy and I never forget where I came from…. It’s important to me to give back for the improvement of my country,” said the rock star, who grew up in a poor neighborhood in Sapang Bato, Pampanga, then was adopted at age 14 by an American family.

Rafael  Lopa, president and executive director of the Ninoy and Cory Aquino Foundation (NCAF), in a joint press conference with the 57-75 Movement, the Department of Education and the Apl Foundation  announced the pre-launch of the campaign at Sofitel with Apl.

Apl.d.ap and NCAF plan to build 10,000 classrooms in two years or less through the advocacy. Corporate sponsors are encouraged to pledge for classrooms while citizens, too, can donate P10 per day for 10 months to build the classrooms.

Lopa said that one classroom costs P600,000 to P650,000, as estimated by the Department of Education. He said NCAF was lucky to have reached out to apl who had “a soft spot for education” in order to build a classroom one day at a time.

Apl.de.ap expressed his intent to focus his efforts on closing the huge gap in public school classrooms because “he knows what education can do to someone’s dreams.”

Apl, with his signature shades and mohawk hair, shared that his grades were “pretty good” when he was a student despite his eye condition which meant he had to sit in the front row of the class in order to read what was on the blackboard.

“I would get 85 or higher. When I have difficulty, I get 80, but I had my share of 75, too,” he said. “I had a scholarship so I had to submit my grades and my father was actually impressed.”

Apl said that when looked back at his difficult childhood, he saw no room for pity, adding he would rather focus on “doing what you can.”

When asked what his favorite subject was, apl said it had to be “English” because he knew he was getting ready for adoption in the United States.

“I remember I told my mom that I was scared. I asked her, how will I talk to everyone in English? And my mom gave me a dictionary, where I learned one day at a time,” he said.

His colleagues in BEP – will.i.am, Fergie and Taboo  — fully support the “You Can Be Anything” campaign and even set the campaign grand launch at the Black Eyed Peas concert on October 25 at the SM Mall of Asia concert grounds.

“They have been very supportive of my requests. They got my back,” said apl.

From his own experience, apl.de.ap said he knows how important it is to get a good education. On Nov. 18, 2008, he launched the Apl Foundation to help various communities and children in the Philippines and throughout Asia.

“Perhaps, it is providential that his birthday falls on November 28, a day after that of Ninoy Aquino,” Lopa said. “This tells me that he is destined to help us take the Filipino brand of heroism to the next level.”

Apl said that the first step to help is in one’s intent. Everything else one needs to know to support the campaign is at www.wecanbeanything.com.