For Jun Sabayton, voters’ education through satire is no joke

“WE WANT to tell voters to not just settle for the lesser evil; we should look for a candidate worthy of becoming a true leader,” said film director and social satirist Jun Sabayton, who’s the face of News5’s recently launched election advocacy campaign, “Bayaw for President.”

The project will present aseries of documentary-style vignettes that will parody the current local political landscape and its players, as they gear up for next year’s national election.

In a cruel twist of fate, Sabayton explained, his character is involved in various corrupt practices, which will eventually be revealed as the mock campaign progresses.

“We’ll follow election-related events and issues, more so once politicians start filing their certificates of candidacy,” he told reporters at a press conference that mimicked a real election sortie, complete with speeches, a marching band and an annoyingly catchy jingle that blared throughout the event.

First featured in an episode of Lourd de Veyra’s satirical program “Word of the Lourd” in 2013, “Bayaw” will make use of humor to deliver its message.

Its content, Sabayton said, will be crafted by him and “Kontrabando” cohosts and longtime collaborators, De Veyra and RA Rivera. 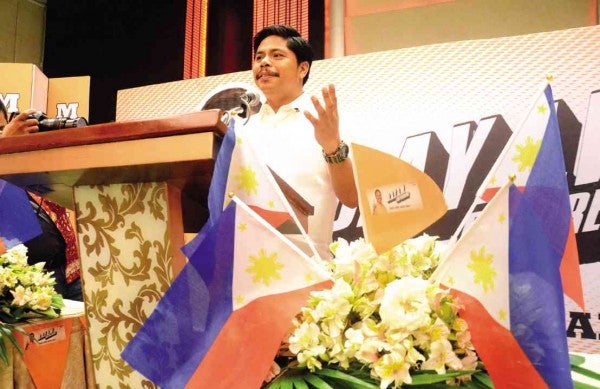 SABAYTON sees himself as “an artist who wants to express and critique” through the show. PHOTOS BY ARNOLD ALMACEN

“We’re pushing for voter’s education through comedy. The satire should be subtle and can easily be understood and grasped,” pointed out the television personality, who admitted that he still gets a bit conscious at times in portraying his trapo  (traditional politician) character.

Although most people get that “Bayaw” is meant as a spoof, there are others, Sabayton said, who genuinely believe that he’s gunning for the presidency.

“I want to clarify that this isn’t a real campaign,” he said of the program, which airs during the gaps of “Aksyon News” shows. “I’m not even 45 years old,” he quipped.

But has he ever thought of running for public office… for real?

“No, it’s a messy world…I just see myself as an artist who wants to express and critique through shows like this,” Sabayton said, adding that he doesn’t think the program will offend the 2016 hopefuls.

“Ang pikon, talo (Those who get upset lose in the end),” he said. “Anyway, our material will come from current events and the news that the media reports. We’ll just add a little twist to make those incidents humorous.”