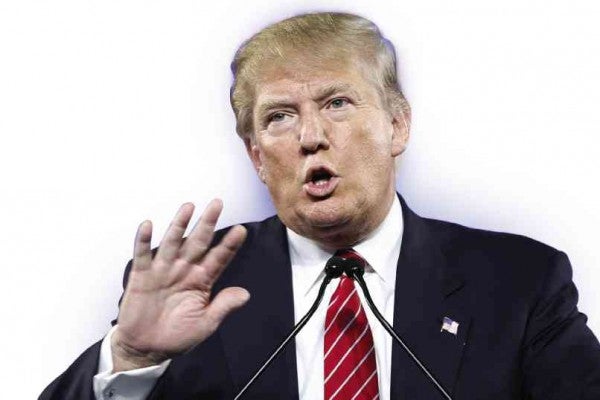 DONALD Trump is an expert at how to get a big, positive reaction from the televiewing nation. AP

Don’t look now, but billionaire businessman and TV host Donald Trump has been making big waves on the political scene in the United States, “suddenly” establishing himself as the man to beat in the Republican presidential derby for next year’s polls!

Time was when quite a number of people dismissed “The Donald” as a political gadfly and merely diverting distraction from the real issues and major shakers and movers. Well, no longer:

The latest straw vote has him leading the pack of Republican presidential hopefuls at 17 percent, with former front-runner Jeb Bush coming up short at only 14 percent. What happened?!

Well, “The Donald” has been teaching everyone willing to learn a master class in “Trumpmanship”—or, pretending to be the silly Joker in the deck of cards, when in fact he’s turning out to be the King—or, at second best, the kingmaker! Nobody’s laughing now.

How did Trump up and trump everybody else? He did it by adroitly and expertly using the “kingmaking” medium of television (think Kennedy and after). Having produced hit TV shows like “The Apprentice” for over a decade, Trump has gone from being not just a billionaire, but also an expert at how to get a big, positive reaction from the televiewing nation, to get the viewership—and now the “votership” he’s after! Jeb and everybody else, listen and learn:

In the specific case of the Republican presidential candidate race, Trump timed the announcement of his availability and candidacy perfectly, soon after Bush announced his, to suck the wind out of the befuddled and trumped Jeb’s sails. Next, he came out with both pistols blazing—or rather, his ack-ack mouth, spewing all sorts of controversial, fearless and even shocking statements, like denigrating Mexican immigrants and US foreign policy and bad economics, etc.

Some listeners dismissed his tirades as crazy and buffoonish, but Trump was “crazy”—like a fox! He knew that the anger and fears he was expressing were being felt by many conservatives in the United States and they were eagerly looking for someone to verbalize them for them—and now, they’d found their champion!

In addition to “daring” to express what a growing number of “ordinary” people felt, Trump knew how to express it—in big, loud, hot and fiery terms, so that everyone talked about it, thus giving it an extended life of its own due to the retelling.

Even his scathing critics have ended up doing him a big favor by lashing out at his “stupidity,” because their insults fanned the flames—so, who’s “stupid” now?

Of course, his foes hope that, with the polls so far away, Trump will lose steam and “firepower” and eventually fall behind. But, he has been a hit maker on TV for many years, so that means that he knows how to play the popularity and viewability games for the long term.

So, the 2016 US presidential race could end up as a fight to the feisty finish between the Democrats’ own front-runner, Hillary Clinton and “The Donald.” If that scenario does materialize, the next, big question is, who will Trump whom?

Read Next
Superstar’s gift
EDITORS' PICK
Over 3 Million worth of prizes to be won at Smart Padala’s SENDali Manalo Promo!
Acer starts the year off strong with the Aspire Vero National Geographic Edition
Uproar over no vax, no ride policy: Maybe it’s time for gov’t to say sorry—Bello
97% of COVID-19 beds at PGH currently occupied
Japan brings back virus restrictions over Omicron surge
Gear up and get ready to play with Yamaha Mio Gear
MOST READ
1Sambayan names 7 aspirants in its 2022 Senate lineup
Emma Stone calls Andrew Garfield a ‘jerk’ after he ‘lied’ about his ‘Spider-Man: No Way Home’ appearance
Guevarra to Acosta: Obey rules on unvaccinated
PH to import 60,000 tons of fish to cover shortage
Don't miss out on the latest news and information.