Paolo Bediones finally opens up about his sex video scandal 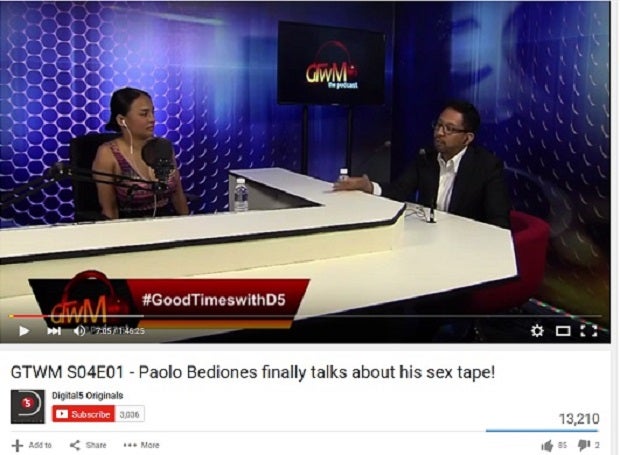 More than a year after he got involved in a video scandal, TV host and news presenter Paolo Bediones opened up about how he coped with the controversy that had affected his career and personal life.

“I was a recluse for a while, and it was just my really close friends and my family (that I spent time with)…and I’ll take this opportunity again, I never got to say sorry to my family, you know, for the shame that I brought to them for that period of time. They’ve always been there for me, no matter what,” Bediones said during an interview in the “Good Times with Mo” podcast with hosts Mo Twister and Erika Padilla last Monday.

He added that he struggled the most with the guilt he felt for hurting others, particularly his then girlfriend, because of his negligence.

The news anchor revealed that he gave TV5 full disclosure that he had a sex tape way before it went viral.

“(I gave) full disclosure (to) TV5. I told them before. They knew before they got me. They said, ‘Let’s deal with it when it comes out,’” Bediones said.

“And unfortunately, on that day, July 27, it came out. TV5 aired a statement of support, saying it was a private issue, and it has nothing to do with his job as an anchor.”

Bediones said that the major TV networks, including rivals ABS-CBN and GMA 7, told him that they had a copy of his video, but assured him that it won’t be released.

“There were a couple of reporters trying to make a story out of it…I guess it was (the) goodwill that I was able to spread throughout the years in show business,” he said.

During the interview, Bediones recalled how he spent the past four and a half years in fear before the video came out.

“Basically, for the next four and a half years, that was how I would live my life, I would pray at night, I hope it wouldn’t come out. I would wake up in the morning, I hope this is not the day,” Bediones said.

According to him, the video came about when he and his then girlfriend filmed their intimate moments without thinking that it would later go viral.

“About five and a half years ago, we decided to, for a lack of a better way to describe it, shoot a video. And we shot a, I think it was a two-hour long video…it was a video that just kept on rolling, and we were changing the positions of the laptop,” he said.

After filming the video and forgetting about it, Bediones said he had his laptop repaired due to a battery problem.

“So I brought the laptop to a store, I don’t want to name a store yet, but the NBI and PNP are on it, so I brought it to the store and…they did inform me that it was outsourced it to Greenhills. When I got the laptop back, I opened it and…the password’s been disabled. So, medyo nakutuban na ako (At that point, my instinct kicked in.),” Bediones said.

“You know how it is when you feel really sick in the pit of your stomach, you’re like, ‘okay, there’s something wrong,’” he added.

Three months later, he received snail mail which included screencaps of the video, accompanied by messages threatening to spread the video if he does not meet the sender’s demands.

“The message was ‘tawagan mo kami, mainipin kami pero madali kausap’ (‘give us a call, we’re impatient, but we are willing to compromise’),” Bediones said.

He added that the sender was asking for P3 million in exchange for keeping the video private. He initially refused to approach the authorities for help to avoid turning it into a big issue.

Moving forward from his struggles in the previous year, the TV host thanked his supporters in the industry and apologized if he had disappointed anyone.