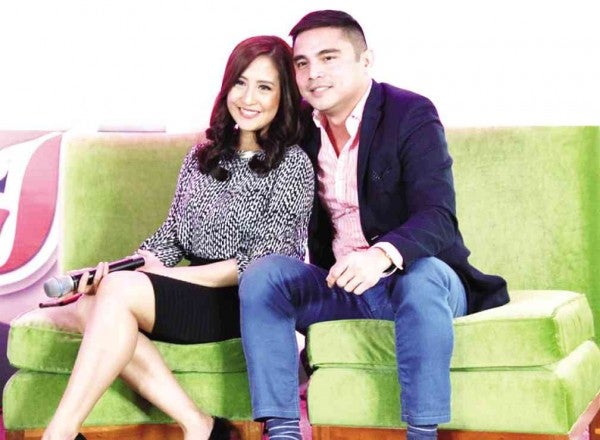 “WE NEED to offer our emotional support as much as we can,” says Jolina Magdangal (shown in photo with costar Marvin Agustin).

“We need to look after our children, and offer them emotional support as much as we can,” said actress Jolina Magdangal when asked about her thoughts on recent issues hounding young showbiz personalities.

The “FlordeLiza” star is wife to musician Mark Escueta and mom to toddler Pelle. “More than my son, I was concerned with Rhed (Bustamante) and Ashley (Sarmiento),” she said of her two young costars in the series.

“The news I’ve read and heard about some of our young celebrities were very disturbing. I was also hurt by the harsh comments of netizens, especially those directed at the victims.”

Jolina added: “This made me more curious about what Rhed and Ashley do during their free time. I know that their parents guide them well, but I also want to be there for them. I also want to learn from the girls so I can prepare myself when Pelle is older.”

Jolina said the controversies also forced her to look back at her own childhood. “I tried to recall what I was fond of doing when I was their age. I was busy designing accessories. I didn’t own gadgets then,” she recalled. “We were all very conscious of our public image then. I pity the young celebrities today—their rise and fall from stardom are made quicker by technology.”

Has being a mom helped you as an actress?

Yes, it gave depth to my acting. My role in     “FlordeLiza” is perfect because I play a mother to Ashley. I treat her as my own daughter.

The pilot week of “FlordeLiza” did not do well in terms of ratings. What can you say about its steady climb?

I’m happy with the pilot week’s ratings. I always say that it’s better for a show to start with a relatively low rating, and then eventually go up, rather than start high and end with a whimper. The whole team is proud of “Flordeliza.” Nobody knew it would last for seven months. We’re so thrilled to have been told recently by our bosses that it would be extended for another couple of weeks.

Did you know that, aside from Marvin Agustin, you’d also work well with Carlo Aquino?

This is because Carlo is a brilliant actor. I never thought we’d click because he is way younger than I am. I felt so uncomfortable in the beginning. It would be great if we’d get to work again on another project. Like Marvin, I trust Carlo, especially when doing kissing scenes.

How do you react to comments saying it was ABS-CBN that revived your show biz career?

To be fair, I never quit show business. I just prioritized some things over others, like my music and then eventually my family. I’ve been in the business for 27 years and never gave up on it. I will stay for as long as I’m needed.

I’m thankful to ABS-CBN because it has been giving me interesting projects since I returned. I was at first hesitant to join “Your Face Sounds Familiar.” It was good that I did because I learned a lot from the show. “FlordeLiza” has not ended yet but I’ve already been offered another show, “Written in Our Stars.” The Kapamilya network is so accepting. It welcomed me back with open arms after being away for 12 years.

“Flordeliza,” written and directed by Wenn V. Deramas, airs on the “Kapamilya Gold” afternoon block. The drama marks the comeback and reunion of the Jolina Magdangal-Marvin Agustin love team.