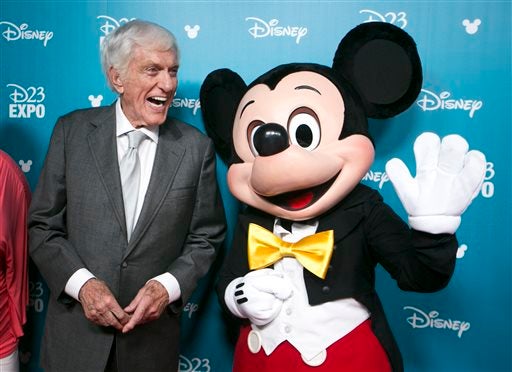 Actor and Disney Legend Dick Van Dyke, left, jokes with a Mickey Mouse cast member at Disney’s D23 Expo, a fan convention on Friday, Aug. 14, 2015, in Anaheim, California. Van Dyke was inducted as a Disney Legend in 1998. The Walt Disney Company honors those who have made significant contributions to the Disney legacy by naming them Disney Legends. (AP Photo/Damian Dovarganes)

ANAHEIM, California — Beanstalks will grow, animals will walk upright, oceans will part, a forgetful fish will remember her family, and toys will fall in love in Disney and Pixar Animation’s upcoming films.

The studio previewed its animation slate and made a number of announcements at the fan convention D23 Expo on Friday, with special appearances from some voice actors including Ellen DeGeneres and Dwayne Johnson.

John Lasseter, the chief creative officer of Pixar and Walt Disney Animation Studios, hosted the presentation, where he announced a Jack and the Beanstalk adaptation, “Gigantic,” and the title of their Dia de los Muertos film, “Coco.” It was also revealed that Shakira would be both providing an original song for and voicing a character in “Zootopia.”

“Gigantic” director Nathan Greno (“Tangled”) said his film would be the definitive version of the fairy tale — with a few spins, including the addition of a 60-foot tall, 11-year-old girl who Jack meets when he climbs up the beanstalk. “Frozen” songwriters Robert Lopez and Kristen Anderson-Lopez, who penned the hit “Let It Go,” will be writing the songs.

Dwayne “The Rock” Johnson was there as well to preview the South Pacific-set “Moana,” out Nov. 23, 2016, which follows a high spirited, 16-year-old princess 2000 years ago. As an act of rebellion, she sets sail to a fabled island with the tattooed demi-god Maui (Johnson).

Directors Ron Clements and John Musker (“The Little Mermaid,” ”Aladdin”) and Johnson teased concept footage and spoke about their extensive consultation with local anthropologists and archaeologists to ensure they accurately represented the area. They also took great pains to characterize what the ocean means to the culture. In the film, it functions as Moana’s spiritual companion.

Johnson said it has been his career dream to be in an animated Disney movie.

“It is my heritage, it is my culture. I am proudly half-Samoan and half-black,” said an excited Johnson. “I’m so deeply connected to this movie.”

Continuing with the international focus, “Coco,” from director Lee Unkrich (“Toy Story 3”), will be about a 12-year-old boy living with his big family in Mexico who inadvertently sets off a life-altering chain of events.

But it wasn’t all new properties on the agenda. Pixar also teased information about “Toy Story 4” and “Finding Dory,” a sequel to the 2003 film “Finding Nemo.” In the film, out June 17, 2016, the forgetful Dory (DeGeneres) endeavors to track down her family.

Director Andrew Stanton said even though he thought that the story ended with “Nemo,” he realized that Dory’s character needed more development. “I wanted to know that if this charming, forgetful fish ever got lost again, that she would be OK,” he said.

Randy Newman closed out the nearly three-hour presentation with a performance of his “You’ve Got a Friend in Me” on stage in anticipation of “Toy Story 4,” which will be a love story between Woody (Tom Hanks) and Bo Peep (Annie Potts). Lasseter, who is co-directing, said it’s a very emotional and personal story that’s inspired by his own wife.

Not all the films talked about are years down the line, either.

Pixar’s long-delayed “The Good Dinosaur” will finally be out on Nov. 25. After previewing the film at the 2013 D23, Pixar removed Bob Peterson as director and pushed its release date back over a year, eventually replacing him with Peter Sohn.

The film puts a new spin on the classic boy and his dog tale. Here, the “boy” is a friendly Apatosaurus named Arlo (Raymond Ochoa) and the “dog” is a feral child who walks on all fours. His name is Spot.

Producer Denise Ream said a main goal was to create “a world that feels visceral and immersive.”

They used new technologies to fashion “majestic landscapes,” including some strikingly realistic-looking rapids, which sweep Arlo away from his family into unknown territories.

Directors Byron Howard and Rich Moore were likewise there to preview “Zootopia,” out March 4, which is set in a human-like city populated by animals who walk upright, wear clothes and hold human jobs. The film centers on bunny cop Judy Hopps (“Once Upon a Time’s” Ginnifer Godwin) who heads to the big city to pursue her law enforcement dreams. There she gets entangled with a mischievous fox, Nick Wilde (Jason Bateman).

The bi-annual convention, now in its fourth year, runs through Sunday.