Learning how to sing for our lives | Inquirer Entertainment

Learning how to sing for our lives 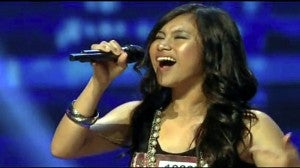 FIL-AM Ellona Santiago makes it to the final 16 in “The X-Factor.” videograb

Last Sunday, October 9, we watched both “The X Factor USA” and GMA 7’s “Protege” and learned a lot about the difference between American and Filipino singing hopefuls.

The American bets on “X” sang with great gusto, as if their lives depended on it. Some of the local bets on “Protege” were also vocally gifted, but their performances were generally less committed and dynamic. They were content merely to display their vocal range and prowess.

The American singers did more than just sing, they infused the renditions with their own unique personality and individuality. In addition, they paid a great deal of attention to interpretation and emotional “investment.”

In contrast, the Filipino bets didn’t “enter” into the songs they sang, and the feelings they expressed were quite standard.

All told, therefore, the singers on “X” came off much better as total and unique performers and people, while the local bets on “P” were relatively more predictable in their performances.

It’s clear from this comparison that there’s a big difference, not necessarily on vocal ability, but in interpretation, commitment and reason for singing, between “them” and “us.”

They’re absolutely bent on winning and thus sing for their lives, while we also want to win but don’t feel that we necessarily have to “kill” ourselves to do it.

In addition, we sing more “for display” and to please our listeners, rather than using our singing voices to express how we feel about the lyrics and music we’re sharing with our audience. We settle for aping or “xeroxing” the renditions of foreign singing stars, and let our performances go at that.

In so doing, we miss out on one of the main reasons for performing—emotional expression and sharing, and the insights and other rewards to be derived therefrom.

So, why do we settle for this relatively limited and limiting view of local performance? Because many of us aren’t emotionally expressive in public, and remain in the dark about the genuine power of performers to affect and influence their audience with their artistry and artistic insights. What a loss for both performer and listener alike!

Given this general coyness and lack of artistic commitment on the part of many Filipino singers, it was instructive to see on “X” last Oct. 9 a Fil-Am semi-finalist named Ellona Santiago, and to thrill at how well she did in that much more “souped-up” competition.

Ellona was really lovely, had a great voice, and sang with all her heart—impressing the tilt’s celebrity jurors. She was the only Fil-Am bet who survived the competition’s early rounds, so we hoped and prayed that she would get into the finals, where the 32 bets would be personally mentored by the judges. Alas, it didn’t happen.

But before the show ended, the judges had a big surprise for everyone: They announced that there had been so many great singers who didn’t win, so they were forming two groups of eight singers each who would also get into the finals – and Ellona was one of the “surprise” 16!

You see, if we stop playing it coy and cool, we can do it!