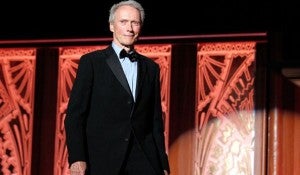 NEW YORK – He faced defeat in a presidential election, he was 18 points down in the polls, and George H.W. Bush needed a partner who could ride to the rescue: Clint Eastwood.

At least that was one idea thrown out during the hunt for a vice presidential candidate in the 1988 election, it was revealed Friday.

Bush senior was far behind his Democratic opponent Michael Dukakis and wanted someone able to revive his ticket, a senior aide says in an interview featured in a newly released oral history at the University of Virginia’s Miller Center and Bush Presidential Library Foundation.

“When we were way behind. Honestly, [Eastwood] was suggested in not an altogether unserious [way],” James Baker, a Bush-era secretary of state and confidant, said.

“Anyway, it was shot down pretty quick. But we were looking at an 18-point deficit,” Baker said.

Fans of Eastwood might have enjoyed seeing the star of several spaghetti westerns and the gritty “Dirty Harry” movies deliver his steely stare from the White House. Until then his only political experience was as the Republican mayor between 1986 and 1988 of Carmel, California.

Instead, the campaign opted for Dan Quayle, a youthful senator, and won the election.