Wonder Girls back as a sultry retro band 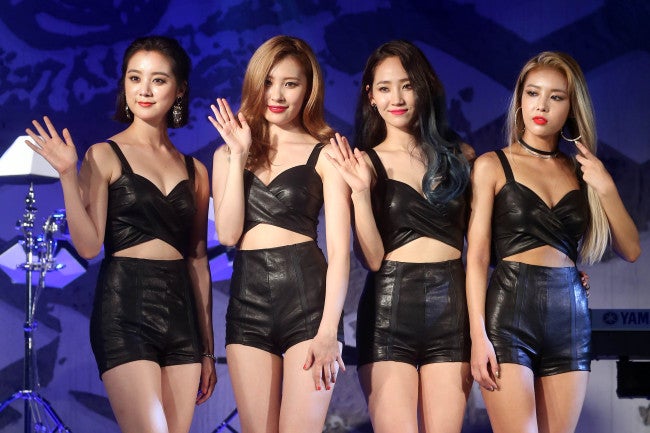 The Wonder Girls pose for the media at Hyundai Card Understage in Hannam-dong, Seoul, Monday. (Yonhap)

Newly reorganized into a four-member band, the Wonder Girls now consists of Lim on guitar, Sunmi on bass, Yenny on the keyboard and Yubin on drums.

“It feels really strange and new to be back after three years,” said Lim at a press showcase Monday at Hyundai Card Understage in Hannam-dong, Seoul. “And on top of that, we’re back as a band. It’s great.”

According to Yenny, the idea to make the Wonder Girls into a band started when the girls played their track “Girlfriend” together for fun. “We all started playing as a hobby,” she said. “When (JYP employees) saw us play, they thought it would be nice to show that side of us to the public.”

The “Reboot” album presents the Wonder Girls’ transformation from a dance group into a genuine band, while giving recognition to the retro style that catapulted them to superstardom.

Eleven of the 12 tracks on the album, except lead single “I Feel You,” had either music or lyrics written by the members themselves, spanning the spectrum of ’80s genres including retro dance, retro pop ballads and old school hip-hop.

“We started writing the other songs after ‘I Feel You’ was chosen as the lead single,” said Yenny. “We figured, if we were going retro, we might as well make all 12 tracks representative of the ’80s.”

“I think it’s so funny that all of our songs since ‘Irony’ have been retro,” Sunmi said. “None of us grew up listening to songs from that era. The sounds were new to us, and we didn’t really know the sentiment of that period. The fact that we interpret that music in our own style is what sets us apart.”

The title track “I Feel You,” written by JYP Entertainment’s head producer Park Jin-young, is a funky, rhythmic ’80s freestyle song that has the girls dancing while playing their instruments.

“Before we finalized our performance, our biggest concern was whether it would be all right for the Wonder Girls to not dance,” said Yenny. “We knew that many people loved us for the songs they could sing along to and choreography they could dance along with. But once we added the dancing, we were relieved because we thought it would make the music easier to approach.”

Yenny also explained that the members did not record the instrumental tracks on the album themselves, in order to create the best balance between band music and the Wonder Girls’ existing style.

“We wanted to play and show music based on retro pop, which is the Wonder Girls’ trademark,” she said. “Hopefully, we can prepare (our instrumental skills) more for our next album.”

The Wonder Girls, who debuted in 2007, released their third studio album “Reboot” on Monday, with the title track “I Feel You” immediately hitting No. 1 on the charts.

“I really didn’t have high (ranking) expectations for this song,” said Sunmi. “We’re so grateful that (our fans) haven’t forgotten us, and that they’re still supporting us.”