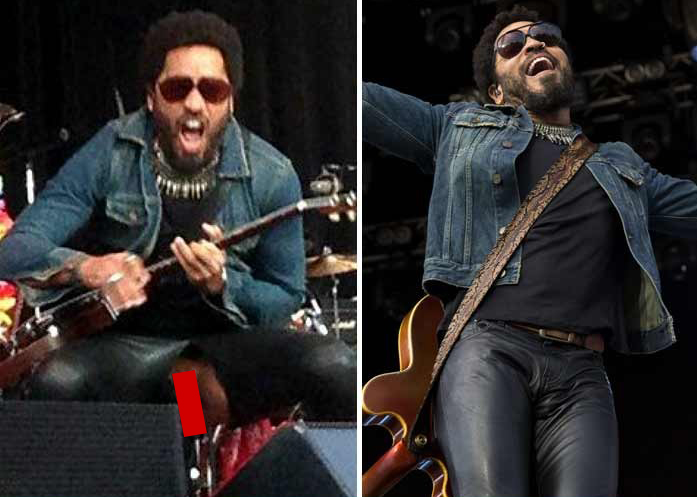 Among Lenny Kravitz’s more famous songs are titled “Are You Gonna Go My Way” and “Come On Get It” and his legion of female and gay male fans seemed to have had a feast day.

The American rock singer ripped his leather pants off in a wardrobe malfunction while performing before thousands of cheering fans in Sweden on Monday night (Tuesday in Manila).

While playing his electric guitar, Kravitz’ leather trousers split open when he squatted down in a rock-star fashion at the front of the stage and accidentally exposed his penis.

Photos circulating on social media showed that “Fly Away” singer was not wearing any underwear during his performance at Gröna Lund theme park in Stockholm.

According to reports, the 51-year-old rock legend left the stage for a few minutes after the incident and re-appeared with a new pair of trousers.

European news outlet The Local quoted an audience member saying that the show’s producer “stepped up and said that they had serious problems on stage.”

Kravitz is also behind the hit song “Ain’t It Over ‘Til It’s Over” and the more famous revival of “American Woman,” by Canadian rock group The Guess Who.

He currently holds the record of having the most number of Grammy Awards in the Best Male Rock Vocal Performance category.

He was scheduled to perform in Manila on March 24 this year but it was cancelled due to “scheduling conflicts.” TVJ