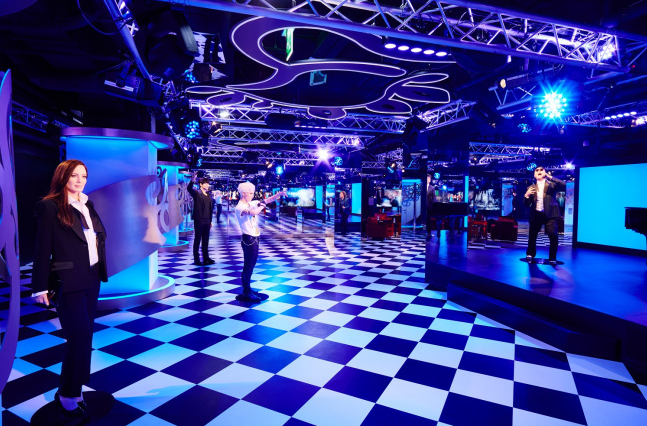 Leading K-pop stars, such as Psy, G-Dragon and Rain and dozens of other Korean celebrities, as well as historic and sports figures, have been brought to life in wax models at the Grevin Museum opening in Seoul last Thursday.

“We decided Seoul to be our first destination for Grevin Museum in Asia because the city has rich history and strong cultural content. From here, the Hallyu boom has spread throughout Asia,” said Dominique Marcel, CEO of the Compagnie des Alpes, which operates the museum, at a press conference Wednesday at the Grevin Museum in Seoul. The French firm also runs ski resorts and leisure facilities around the world.

The wax figures are on display in different themed rooms.

“This is the world’s biggest exhibition featuring Hallyu stars ranging from the first generation stars to the latest ones,” said Kim Yong-gwan, president of Grevin Korea.

US President Barack Obama, Queen Elizabeth II and secretary-general of the United Nations Ban Ki-moon are gathered in the same aircraft, accompanied by the noise and tremor felt in an actual flying aircraft.

The museum also attempts to impress visitors with a state-of-the-art audio and light system that helps them be fully immersed in the viewing experience and take quality selfies and photos.

It expects to receive 450,000 visitors per year, including foreign tourists from other Asian countries, including China and Japan.

“We found a great potential in Seoul for attracting many other Asian tourists. We hope the Grevin Seoul is one of the tourist attractions that tourists don’t want to miss,” said Marcel.

The museum plans to add four to five new models each year in addition to the current list of figures.

At the end of the museum tour, visitors can learn the steps of making wax figures and make their own wax figure with the special software that scans one’s face and turns it into a three-dimensional image.