Mad for Madonna even at P3K-P57K tickets | Inquirer Entertainment

Mad for Madonna even at P3K-P57K tickets 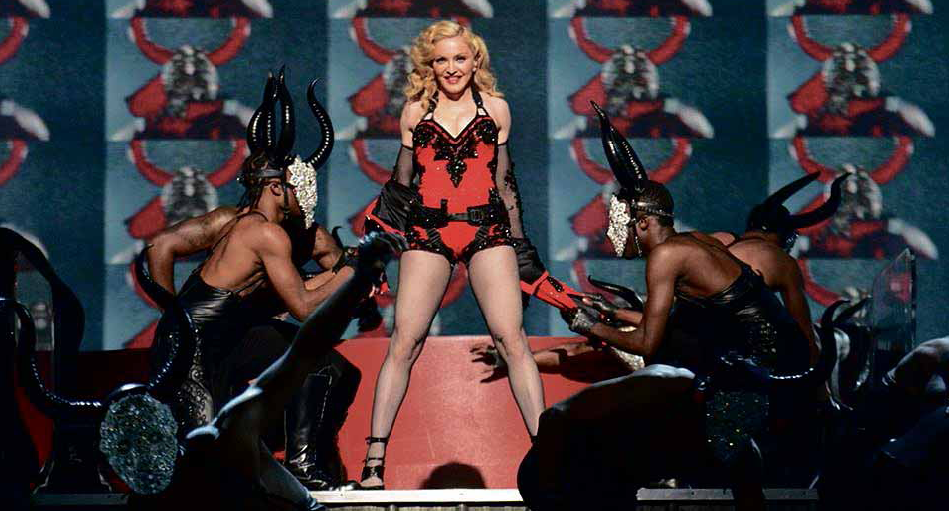 ‘HORN-Y’ The upcoming Philippine leg ofMadonna’s Rebel Heart tour promises to be a theatrical spectacle, as sampled by her performance at the 2015 Grammy Awards held in February in Los Angeles. PHOTO FROM FACEBOOK PAGE/MADONNA

The Philippines may still be struggling to curb poverty and unemployment, but the country’s middle class seems to have adapted to a lifestyle that used to be the domain of the rich and famous.

Proof: Madonna’s Manila concert at SM Mall of Asia (MOA) Arena on Feb. 24, 2016, is more than six months away, but already, there is much ado about getting tickets now, “before they run out,” a midlevel corporate executive told the Inquirer.

Those who have made a purchase proudly posted the tickets’ image on their Facebook pages.

And while most Filipinos also took to social media to comment about the outrageous ticket prices—from P3,150 to P57,750—many others did not hesitate to respond to the organizers’ promotional offer: priority seats for members of Madonna’s official fan club Icon, Citibank cardholders and Globe Telecom subscribers.

It took one week before the official announcement on July 29 that the Manila concert, part of Madonna’s “Rebel Heart” world tour, will have a second night on Feb. 25, 2016, although the Inquirer had reported it in advance (Madonna in Manila confirmed: 2 nights at MOA Arena, lifestyle.inquirer.net, July 1).

The decision to hold back the announcement of the second night was a calculated move, sources say, to test if the Philippine market was ready for advance ticket sales, especially for a top concert act like Madonna.

Apparently, the scheme worked because it afforded those with a tight budget to buy tickets via credit card or charge to their mobile phone bills.

But why are the tickets here more expensive than those in other countries?

According to Inquirer sources, the cost of bringing Madonna and her entourage of dancers, live band and production crew to the Philippines is approximately $4 million (P180 million), excluding hotel accommodations and other production expenses.

That’s an awful lot of money, and it took the SM Group, which owns MOA Arena, to bankroll the amount, sources said. SM’s founder Henry Sy Sr. may be the country’s richest man, but producing concerts is still a business—even if Madonna’s Manila shows could just be for prestige, the sources pointed out.

For a time, another group was determined to bring her to perform at another venue, the Iglesia ni Cristo-owned Philippine Arena, where tickets could be priced lower since it is about five times bigger than MOA Arena. In fact, a Philippine Arena representative had aggressively expressed his desire to bag the deal when he called up the Inquirer and said, “Sa amin na lang si Madonna (We want Madonna)”—even before finding out who the promoters are.

The Rebel Heart tour is said to be the 56-year-old pop queen’s third and final tour under the 10-year multirights deal with Live Nation, signed in 2007 for $120 million.

As for her Filipino fans who may be wondering what their idol would be singing at her MOA Arena concerts, here’s word from the Macomb Daily, a publication in Madonna’s hometown Michigan: “By July 2015, Madonna was still working on the set list with her team of creative directors, producers, designers and choreographers. She described the tour as a ‘characteristically theatrical spectacle’ and would include songs from her whole career.”

A recent article on Billboard.com said: “However, picking the set list was hard since the singer wanted to perform the ‘Rebel Heart’ (album) songs as well as her old discography, too, in order to satisfy all her fans. She found the task challenging since ‘thematically the songs— the old and the new—they have to go together; sonically they have to go together.’”

Madonna to touch PH for the very first time

Madonna Has More Friends Than Taylor Swift in Music Video