Madonna to touch PH for the very first time 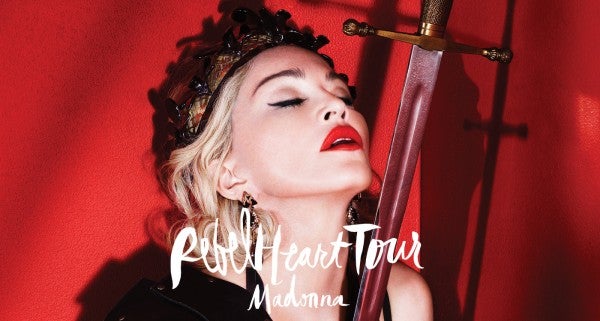 American recording artist Madonna, who’s widely regarded as a pop culture icon, is set to hold a concert and touch base with her Filipino fans for the very first time on Feb. 24, 2016, at SM Mall of Asia Arena, according to local promoter Music Management International (MMI) Live.

The show is part of Madonna’s 10th world tour “Rebel Heart”—produced by Live Nation Entertainment—which kicks off on Sept. 9 this year in Montreal, Canada, in support of her 13th studio album of the same title.

“Madonna continues to be one of the most successful touring artists in history. Her shows are always legendary and we are thrilled to have her back on tour,” Arthur Fogel, Live Nation-Global Touring president and Global Music chair, said in a statement.

Though earlier reports stated that Madonna’s visit to Manila would be a two-night musical affair, no confirmation or formal announcement was immediately available from organizers regarding a second date.

Publicity materials and ads for the show, which are expected to go full blast Monday, July 20, likewise carry only a single date.

Tickets will be available at SM Ticket outlets and through its website, www.smtickets.com, starting July 26 at 10 a.m. The price list has yet to be released, but there is talk that the best seats may cost as much as P50,000.

For die-hard supporters of the singer-songwriter-actress, hailed by many as the “Queen of Pop,” there are ways to get hold of tickets early.

Presale opportunities will be given to members of Madonna’s official fan club, Icon, on July 21; Citi cardholders from July 22 to 23; and customers of Globe, a major sponsor of the show, on July 24 through www.globe.com.ph/rebelheart.

After Madonna’s first show in September, she will continue to perform around North America, before going to Europe and then next year to Asia and Australasia.

The tour was announced on March 1—five days before the release of her “Rebel Heart” album, which, as the title suggests, showcases the international star’s renegade and vulnerable sides.

The record, which received generally positive reviews, debuted at No. 2 on the Billboard 200 charts. It peaked at No. 1 in Australia, Canada and Germany.

It has so far spawned three singles: “Ghosttown,” “Living for Love” and “Bitch, I’m Madonna”—the first two reaching No. 1 on the Billboard Dance charts.

Madonna is known for pushing the envelope and reinventing her music and image throughout her more than 30 years in the biz. Her concert in the Philippines could well turn out to be a landmark event in the local concert scene, considering that she has yet to perform extensively in Asia.

And when she did, her concerts were almost exclusively held in Japan.

As of late, Madonna, 56, has been posting on her Instagram account what fans believe are subtle hints of what can be expected from her song list to further build excitement for her tour, which so far includes over 60 stops.

Madonna has sold more than 300 million records worldwide and paved the way for a slew of solo female artists, like Lady Gaga, Britney Spears and Miley Cyrus.