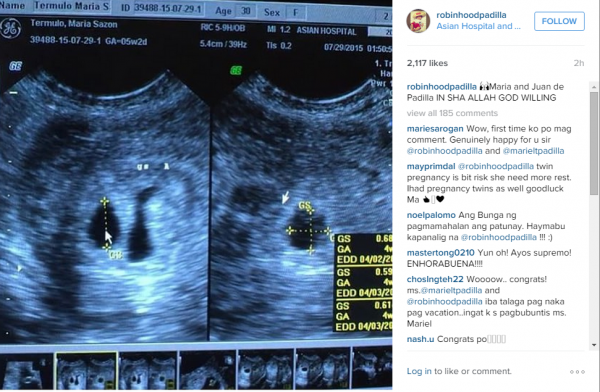 Months after suffering a miscarriage, TV host and actress Mariel Rodriguez is pregnant with twins, her husband Robin Padilla announced on Saturday.

Padilla posted a photo of Rodriguez’s ultrasound test on Instagram.

The location of Rodriguez’s series of Instagram posts in the past two days showed that she was confined at the Asian Hospital and Medical Center in Muntinlupa.

In March, Rodriguez, who was then eight weeks and three days pregnant with her first child with Padilla, said that she suffered a miscarriage.

The TV host-actress asked for everyone’s prayers as she builds a family with the action star.

“I implore everyone to pray for us because we need all the prayers that we could get,” Rodriguez said.

Rodriguez and Padilla have been married for five years. YG with a report from Bayani San Diego, Philippine Daily Inquirer/IDL