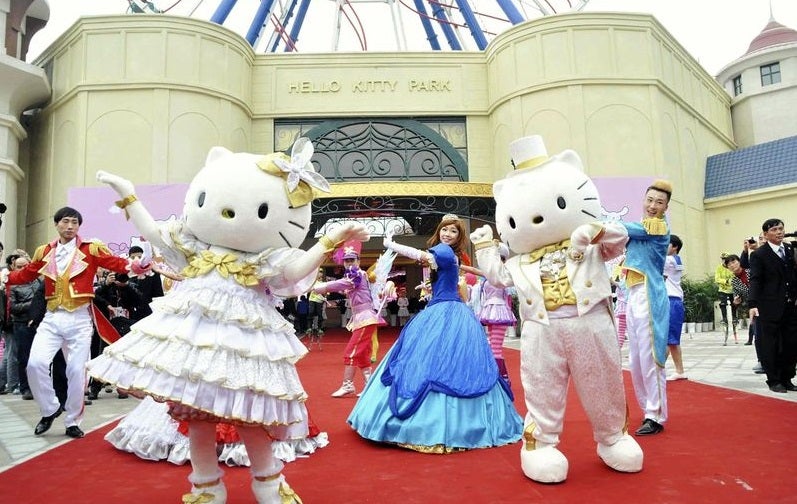 Sanrio characters dance at a ceremony commemorating the completion of the Hello Kitty theme park in Anji, China, on Nov. 28, 2014. PHOTO FROM THE YOMIURI SHIMBUN/ASIA NEWS NETWORK

Sanrio Co. has established a US subsidiary that will produce and distribute animated films featuring Hello Kitty, hoping to better promote its imaginary cute character overseas.

The subsidiary will likely release its first Hello Kitty movie as early as 2019, marking the 45th anniversary of Kitty’s birth, Sanrio said.

The US subsidiary, Sanrio Media & Pictures Entertainment, Inc., was established in June. It will employ senior officials and production staff from film companies in Hollywood and elsewhere. The total operating costs for the first Kitty films, including film production and advertisement costs, is estimated at 20 billion yen to 30 billion yen (US$161 million to $242 million). Funds will be raised from several companies.

Sanrio intends to produce films based on its own characters besides Hello Kitty to strengthen character goods sales and make these characters better known.

Sanrio’s overseas operations account for close to half its total sales. However, overseas sales in the business term ending in March fell by 7.6 per cent from the preceding business term. This is due to a decrease in the sales of its character goods caused by a reduction in its sales areas at retail stores to make space for merchandise for Walt Disney’s big hit film Frozen. Therefore, Sanrio hopes to recover its business overseas by entering the film business.

Stories featuring Hello Kitty have already been animated and broadcast as Japanese domestic TV programs. Sanrio considers that with the character already popular worldwide, the groundwork to start film production in other countries has been prepared.

Hello! Hello Kitty not a cat, she’s a Brit