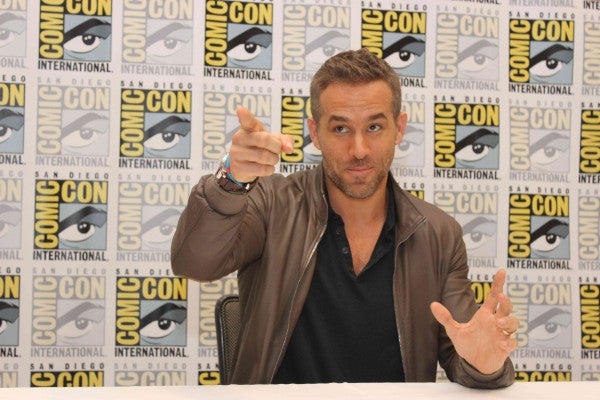 THE FORMER “Green Lantern” actor is a fan of the “meta, self-aware” Deadpool. Photo by Ruben V. Nepales

LOS ANGELES— Just how involved is Ryan Reynolds in bringing Deadpool, Marvel Comics’ most unconventional antihero, to the big screen? He wept upon seeing his Deadpool suit, finally perfect after many alterations, sometimes involving complete redesigns that required starting from scratch. Ryan shares with us this emotional moment, part of his 11-year journey with this passion project.

Who is your favorite comic book character and why do you like Deadpool?

Deadpool far and away precedes Green Lantern for me. It’s been 11 years that I have been trying to get this made. He is a character that I adore because he occupies a space in the comic book universe that no other character can or will. He’s meta, he’s self-aware; he breaks the fourth wall and he understands that he is in a comic book. For us, it provides these limitless possibilities.

And for us, above all, the aspect that we were able to do the film in the most authentic way we could, which was rated R and which is something that not a lot of studios are willing to write a check for, for a property such as this. So it was a series of events that I just never saw happening. And I have been attached to this thing formally for six years and 11 years, as the story goes.

What is interesting about this guy is that he started out almost like this super villain, and now he is kind of an antihero. What difference does that offer the genre?

Okay, I love these questions. I will say this, he was never a super villain but he’s always been morally flexible, which I think is integral to the character. And having a character that exists in the superhero world who is morally flexible is a gift because there are characters out there who are edgier and have some grit to them.

But Deadpool, at the end of the day, the bottom line, just doesn’t give a f***. That is an amazing freedom to have. That is at the core and the root of the character, and it’s incredible. So it allowed us an enormous freedom, both in our action sequences and in the dialogue and the narrative of the character.

Talk about the costume. What’s a superhero without a cool costume? 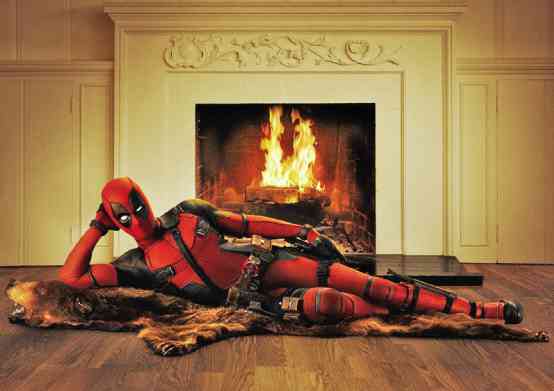 THE ACTOR describes his costume as “a fantastic piece of engineering… made from strange, space-age material.”

Man, I will go on record saying that that is the single most faithful adaptation of a comic book hero to film that I have ever seen. Blood, sweat and tears went into that suit. Russ Shankles is the guy who created, designed and engineered it.

The suit is made from strange, space-age material. There’s a tiny bit of leather in there. There are all kinds of stuff.

You don’t really exist in the suit—you kind of pilot it. It really is a fantastic piece of engineering. I remember we saw a number of different iterations of the suit. We did not stop fighting until it was perfect. Long after we were told that it was impossible to make the deadline if we change the suit again, we kept saying, “Change the suit again. You are going to have to and you won’t sleep again.”

When we finally got it done and we walked into this warehouse in Simi Valley (California), I will never forget it. It was with Tim Miller (director) who was right there (he was in the back of the room) and he would back me up on this, we wept when we saw that suit. When we saw that suit perfect and it was everything we had ever dreamed of, we literally got teary-eyed.

So it was a really special experience to have that work so well. It was ripped right out of the pages of the comic, and adapted in a way that was palatable for a live-action film. It’s so hard to find a suit that works on a live-action film the way this does.

Did you have to train in a particular way for the action scenes? Did you have bumps and bruises?

You get in shape, you train and you do all those things. Actors love talking about how they put on 40 pounds of muscle, which is physiologically impossible without at least eight or nine years of horse blood. You train and you do what you can to make sure you look like the character in the comic books.

I am 38 years old. When I fall on cement now, it’s not hilarious anymore and it actually hurts like hell. So I find myself lying on the ground a little longer than I used to and just hope that nobody can tell that I am in pain. But I love the stunts. I love doing that stuff, but I am also not an idiot.

I will let the stunt guys do it when it looks like I am going to get maimed because I have 52 days of shooting to do. If I get seriously injured, it’s over for all of us.

Can you talk about the new girl in your life? Is she daddy’s girl?

She is in love with boobs. And I found out that there is very little I can do to rip her away from those at this point. But I support her relationship with breasts wholeheartedly. I think they are important for her. They are important for me, too. Therefore, it’s exciting.

I love being a father. Every cliché that you can think of is true and it’s everything. Being away from them is like an acid bath—it’s just really brutal and awful. I am very lucky and grateful. I work in an industry where 99 percent of my peers are out of work and a lot of them who are working aren’t able to spend much time with their families. I try to make that (spending time with family) as much of a priority for myself as I can.

What does time mean to you? Because when you have a kid, it changes.

I think that time is funny. When you have a kid, you realize that time is inexorably marching forward at a very scary rate. So I feel that now, more than anything. My kid is a half a year old now and soon she will be a year old. We only get 90 years on this planet if we are lucky and if we are healthy.

I keep looking at everybody and going, well that is not enough. I don’t just want these 52 years to stare at you. I want more. I get how that works, but it’s a different ball game when you have kids. Yeah, those pages of time start flipping by a lot faster.