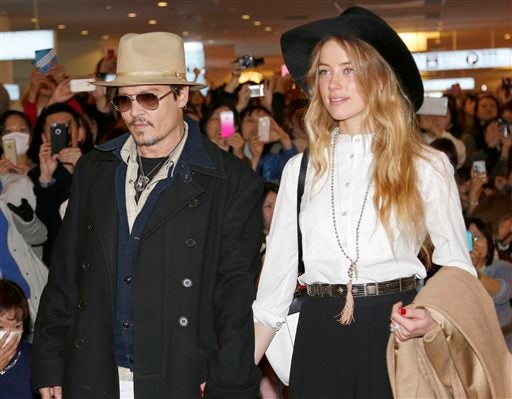 SYDNEY — Johnny Depp’s wife, Amber Heard, has been charged with illegally bringing the couple’s dogs to Australia — an incident that captured global attention after the nation’s agriculture minister angrily ordered the pooches to get out of the country or face death.

Heard was charged this week with two counts of illegally importing Pistol and Boo into Australia and one count of producing a false document, the Commonwealth Department of Public Prosecutions said on Thursday.

Heard was issued a summons to appear in a Queensland court on Sept. 7. Her lawyers could petition the court to appear on her behalf, but given the seriousness of the charge, it’s likely she’ll need to appear in person, particularly if she is in Australia at that time, said Bill Potts, a criminal defense attorney based in the Queensland capital, Brisbane.

The doggie debacle began in May, after Agriculture Minister Barnaby Joyce accused Depp, 52, of smuggling the couple’s Yorkshire terriers aboard his private jet when he returned to Australia to resume filming of the fifth movie in the “Pirates of the Caribbean” series.

Australia has strict quarantine regulations to prevent diseases such as rabies from spreading to its shores. Bringing pets into the country involves applying for a permit and quarantine on arrival of at least 10 days.

“If we start letting movie stars — even though they’ve been the sexiest man alive twice — to come into our nation (with pets), then why don’t we just break the laws for everybody?” Joyce said at the time. “It’s time that Pistol and Boo buggered off back to the United States.”

Officials gave Depp and Heard 72 hours to send Pistol and Boo back to the U.S., warning that if they weren’t, the dogs would be euthanized. A Department of Agriculture officer later escorted the tiny terriers from the couple’s mansion on Queensland’s Gold Coast to the airport, where the dogs boarded a flight to the U.S. just hours before the deadline.

Joyce’s comments were parodied worldwide, prompted a petition to save Pistol and Boo and sparked the social media hashtag #WarOnTerrier.

“The law is the same for everybody,” he told reporters in the western city of Perth. “There is no preferential treatment here. You come into our nation, you have to abide biosecurity protocols.”

The prosecutor’s office would not answer questions about why Depp wasn’t charged, citing the ongoing nature of the case. The Department of Agriculture, which conducted the investigation, also declined to comment, saying the decision on charges was up to prosecutors.

Even if convicted, legal expert Potts doubts Heard will be facing a lengthy jail term.

“The seriousness of the offense is not whether two little puppies — who look like they could give you a nasty nip on the ankle — are dreadful animals, it’s about the risk to biosecurity,” Potts said. “Barnaby Joyce, the minister, told them in colorful language to bugger off — they did. Was there a risk? Potentially, but not actually. And I’m sure the court will take all of those things into account.”

In an interview last month, Heard said she and Depp planned to avoid Australia as much as possible in the future “thanks to certain politicians there.”

“I guess everyone tries to go for their 15 minutes, including some government officials,” the 29-year-old actress told Australia’s Channel 7.

A representative for Depp did not immediately respond to a request for comment on Thursday.