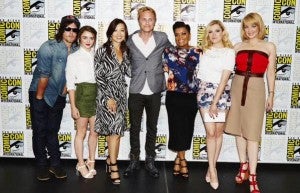 SAN DIEGO, California – Comic Con is where the massive conglomeration of movie and television launches and previews, original content creators, comic book artists and publishers battle it out for attention and buzz.

While Comic Con’s continued stay in San Diego beyond 2018 remains uncertain, the palpable energy and enthusiasm of the Comic Con crowd and fans dominated the event July 9-12.

Like a giant anaconda the lines to Hall H, where all the big movie releases and television hits were held, snaked around the multiple security lines. Seasoned attendees of the convention were wise to bring snacks, drinks, blankets and hats as they lined up two or three days before opening day just to attend the panels of their favorite shows and most anticipated movies. 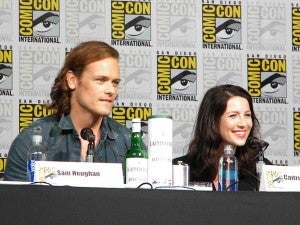 I started attending Comic Con last year and spent most of that time like a wide-eyed newbie taking in the atmosphere and sights. It was a hit and miss year for me, as I was learning the system. This year, armed with the reliable Comic Con app on my phone, I bookmarked the panels I wanted to watch. Instead of heading to Hall H, I made a beeline for Ballroom 20 where most of the television panels were held.

Some of the panels were exciting, vibrant and engaging. Some left me wanting more.

Amazon is making a big gamble in entering the content creation space by producing original shows and series shown exclusively on Amazon Prime. “Hand of God” from creator Ben Watson is described as gripping, pushing the limits, exciting, dark and complicated.

Ron Perlman plays lead character Judge Pernell Harris, a powerful and corrupt jurist who suffers a breakdown when his son goes into a coma. His deep emotional and mental anguish makes him unstable and he starts hearing the voice of God. In his quest for vengence, he starts following the voice of God and the whole town suffers for it. 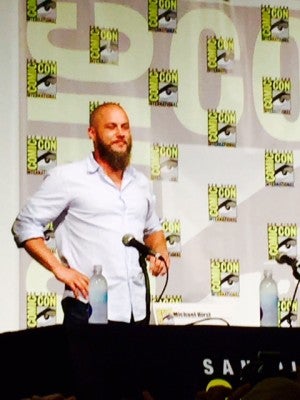 The “Hand of God” pilot is currently available on Amazon Prime, with the rest of the season starting sometime this fall. Definitely a must watch.

The Vikings (This History Channel)

I will admit, I haven’t seen this series, but based on what I saw during the panel, it is now high on the list of my DVR’s season pass.

“The Vikings” panel was headlined by Travis Fimmel (Ragnar) and joined by Clive Standen (Rollo), Alexander Ludwig (Bjorn) and Katheryn Winnick (Lagertha). The cast set a lighthearted tone and were quite playful with the audience. There was a lot of banter between cast members, yet the audience never felt excluded from their conversation. 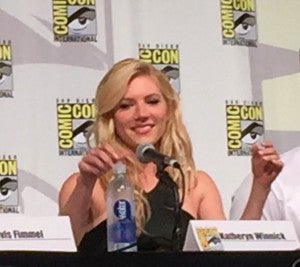 Kathery Winnick plays Lagetha on History channel’s “The Vikings.” Lagertha is considered to be one of the strongest women characters on television.

Highlights of the panel were the sneak peek into Season 4, and the Q&A session when Travis showed his softer side. He left the stage to hug a young fan who was overwhelmed to be in the presence of her celebrity crush.

Fans of the show say that Lagertha is arguably the strongest woman character on television right now and is very exciting to watch. My friends kept raving about this show, and after seeing the cast obviously enjoying each other’s company outside of work, I can only imagine the chemistry they bring in front of the camera. I am a new fan.

Moderator Damian Holbrook adeptly led the discussion participated in by stars from some of television’s biggest shows. Maisie Williams (“Game of Thrones”), David Anders (“iZombie”), Yvette Nicole Brown (“The Odd Couple”), Wendi McLendon-Covey (“The Goldbergs”), Norman Reedus (“The Walking Dead”), Eliza Taylor (“The 100”), Ming-Na Wen (“Marvel’s Agents of S.H.I.E.L.D”) all joined in a no-hold barred discussion that brought on a lot of laughs.

One of the questions asked was how the actors used Twitter. In keeping with the theme of “Game of Thrones” where no character is safe, Maisie Williams shared that she tweeted “Anybody can be killed” in response to a fan’s request for a high school yearbook quote.

There were other stories shared, like Norman Reedus coming to the aid of a vehicular accident victim when he himself had just come from the ER for treatment of an injury. David Anders told a hilarious story related to his obsession with chat and fan boards and how his alter ego, Mabel, was born.

This was such an unexpectedly fun panel. I definitely will not be missing this one next year.

The highlight of this panel was the sneak peek into season 2. The new costumes and sets presage the tone for the next season. From the dreary and bleak Scottish moors to the elegant and sophisticated Paris ballrooms, the two sets and costumes couldn’t be more disparate.

Hard as it is to admit, the panel discussion left much to be desired. Between the drinking games and dressing up Sam as another character half way through the session, I felt I was shortchanged as a fan, especially since I had waited and camped out all day.

I was hoping to see more interaction between the stars, more quips and behind the scenes stories. Alas, the drinking game and costume dress up took up most of the panel’s time. The Q&A session did unearth some gems.

On whether Sam would go through the stones for Claire: “Yes, I would do anything for you.”

On what Sam would sacrifice for love: “Everything.” 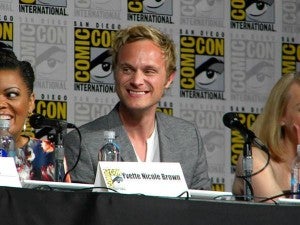 David Anders of “iZombie” shared one of the best stories from the TV Guide panel.

On what Sam is excited about season two: “The first part of the season in Versailles and Paris is very voluptuous and ostentatious. For me the second part, I just know that it gets very emotional and Cait goes through a lot.”

On whether Diana Gabaldon knows how the series will end: “I know the last scene of the last book.”

On preparing prior to filming Wentworth 1 and Wentworth 2: Sam said it was a matter a putting a lot of trust in Tobias Menzies. “It was all about trust. Tobias is such a great actor. I’m very lucky to work with him. I thoroughly enjoyed doing it. I wanted the challenge and hopefully will get challenged more in season two.”

I wish I had the ability to freeze time so I could attend all the panels that interested me – “Star Wars,” “Batman vs. Superman,” “Game of Thrones,” “Dr. Who,” “Sherlock,” among others.

I not only enjoyed ComicCon 2015 from a television fan’s perspective, but it was also a memorable occasion to meet and catch up with friends with shared interests who I haven’t seen in over a year.

That’s the only way to enjoy such a massive show and convention like this – with friends.

Comic Con 2016 can’t some soon enough for some of us. Perhaps I can speed things up a bit … where are those “Outlander” stones?