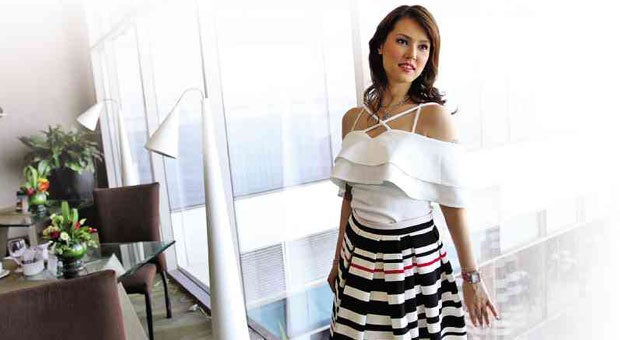 HOW DO you solve a problem like Maria Ozawa’s bashers? “The more they hate, the more I get attention,” she says. RICHARD A. REYES

In the rigodon of usual faces that is the Metro Manila Film Festival (MMFF), a new, unexpected name made it to this year’s mix: Maria Ozawa.

The Japanese actress-model has already appeared in dozens of films, but it’s safe to say that the general Filipino public hasn’t seen any of her movies. Unless, of course, you’re a straight man with an Internet connection and … raging hormones.

“When I visited the Philippines a few months ago, I was asked if I would want to act in a movie here. I said, ‘Yes of course!’ Working in other countries is always such an exciting experience for me,” she related at a press conference, as a gaggle of giddy photographers clicked away.

The offer came as a surprise. She didn’t even know her costar. Ozawa did research, Googled Padilla, and apparently, liked what she saw. “I thought he was so hot … and muscular,” said Ozawa.

After debuting in 2005, Ozawa swiftly rose to fame in Japan; her innocent good looks and voluptuous bod landed her in not a few “hottest” lists.

But she wishes to be known as more than just a sexy star. “I wanted a change. I decided to leave the AV scene in order to make the next step. It’s hard to do everything at the same time,” said the actress whose mother is Japanese and father, French-Canadian.

The 29-year-old celebrity is also well aware that some people have preconceived notions about her. But that doesn’t bother Ozawa, who initially went by the name Miyabi. “We can’t be liked by everyone. I do what I want to do,” she said. “This is a dream come true [for me]. What’s so bad about it? I’m confident.”

Her first encounter with online detractors broke her heart, Ozawa confessed. But instead of letting the negativity upset her, Ozawa chose to see it as something positive. “The more they say bad stuff about me, the more I get attention,” she said, giggling.

Hate, after all, is a feeling, she pointed out. “You can say whatever you want, but that means you care about me, you think about me,” Ozawa said. “You have feelings for me. So thank you!”

Though her previous job entailed shedding her clothes in front of the camera, Ozawa said that she’s actually quite shy. “I get embarrassed when I have to speak English, especially in front of people—just like now!” But when told that she has a good command of the language, her eyes lit up as she clasped her hands and let out a squeal. “Really?”

She definitely wouldn’t want to get embarrassed when shooting for the MMFF entry starts in August. So she vowed to take acting lessons in Japan. “I’ll train in martial arts, Kendo. I’ll learn some Tagalog phrases, too,” Ozawa said.

Ozawa still couldn’t wrap her head around the fact that some people recognize her in Manila. “I was at the airport, with no makeup on, but some people still knew it was me! Or even when I went shopping,” she related. “I was happy and surprised at the same time. I was like, ‘Oh, I’m famous?’”

She described the weather, food and people in the Philippines as “perfect.”

Of course, the media huddle wouldn’t be complete without Ozawa being asked about her thoughts on Filipino men. “Sexy, sexy,” she said, pointing at every male reporter and lensman in front of her, who hounded her for selfies later on. “Everyone’s cute!”