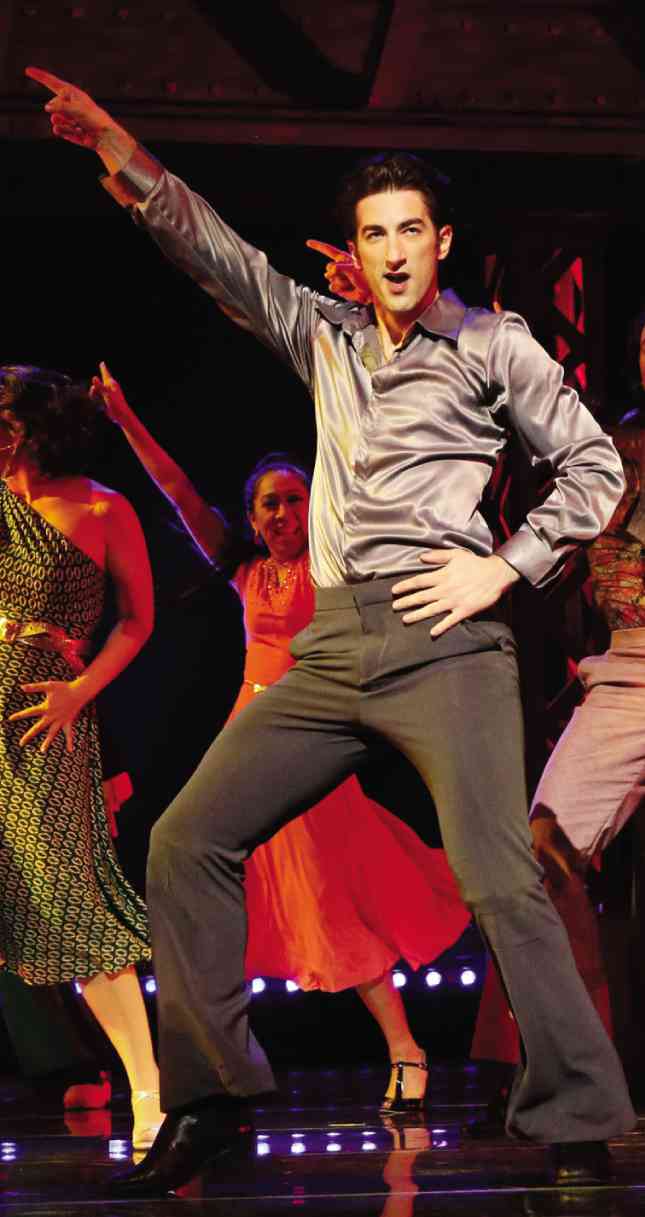 From the moment you hear the opening bars of the classic Bee Gees hit “Staying Alive,” you get the feeling you’ll be in for an amazing ride. And the moment you see the silhouette of the iconic character Tony Manero, a can of paint in hand and his body moving in sync with the music, that feeling is confirmed.

Currently running weekends at the Theatre of Solaire until July 26, Atlantis Theatrical Entertainment Group’s production of “Saturday Night Fever” transports you back to the late 1970’s in the heyday of the hedonism of disco. Places like the now infamous Studio 54 (before its transformation into a Broadway house) were dens of sex, drugs and dance, places that people would pack themselves into for a night of escape from the troubles and tribulations of the times’ economic downturn.

The music was hot; the fashion, iconic; and, for a moment, a guy stuck selling paint in Bay Ridge, Brooklyn was the king of the lighted dance floor, donning a white suit and perfectly coiffed hair.

It can’t be easy for any actor to be cast in the role of Tony Manero (originally played in the film by John Travolta), but director Bobby Garcia, with the help of New York casting director Tara Rubin, found Brandon Rubendall, a Broadway veteran (“Anything Goes,” “Spider-Man: Turn Off the Dark”) who’s also clocked many hours dancing with artists such as Beyoncé, Madonna and Jennifer Lopez.

Not only does he have the authentic Brooklyn accent, but also the looks, the voice and, most importantly, the moves. Not once did I ever have to worry that he’d flub a step or miss a mark. Every single thing he did on that dance floor was spot-on, executed with charm, masculinity and sex appeal.

There is a lovely contrast between how his Tony is on and off the dance floor. Off, he is at times awkward and not always so surefooted. But on, he is carefree and moves with abandon. And this was at his first performance! It will be nice to watch the show again toward the end of its run just to see how much he’ll have grown.

The lovely Jenna Rubaii, plays Stephanie Mangano, Tony’s dance partner, who at the beginning of the musical is all mouth and attitude, but who projects a heartbreaking vulnerability toward the latter part of the show. Her dancing and her singing are also excellent, and she and Brandon share a wonderful chemistry.

A special “scene-stealer award” must go to ensemble members Japs Treopaldo and Jim Ferrer, who could both be in another building and still pull focus. Jim has just returned to Manila after performing in the National Theatre production of “Here Lies Love” in London, so I’m sure he’s learned quite a few things.

Sound quality was excellent, thanks to sound designer Michael Waters (save for a couple of times when the wrong body mic would be turned on), and the set by David Gallo and lighting design by Paul Miller evoke not just the dance club, but also the Verrazano Bridge, another major location in the relationship of Tony and his buddies. Projections by GA Fallarme, music direction by Ceejay Manuel and costumes by Eric Pineda put us in the proper frame of mind for the whole show.

To the entire cast and crew of “Saturday Night Fever,” my sincerest congratulations to you all! Enjoy the rest of your Manila run, as well as your tour stops in Malaysia, Singapore, China and Australia!

When it comes to production managing, there is one who is second to none, a diminutive powerhouse of a woman who goes by the name of Liza Camus. She must be no more than 5 feet tall, but when she enters a room, it’s as if someone bigger just made her presence known.

Liza is a favorite production manager for events, concerts, and musical theater shows (“Saturday Night Fever” is her latest credit, and has worked on many other Atlantis musicals and plays over the years).

I’ve gotten to work with her on the Manila productions of “Miss Saigon” and “Cinderella,” as well as Atlantis’ “Proof,” “God of Carnage” and “Baby,” and most of my recent concerts including “Songs from Home” and “Playlist.”

Her language is peppered by crunchily enunciated Spanish-accented invectives (which cannot be printed here), and the volume with which she speaks is loud and present. Her sense of humor and positive energy infuse every production she is busy with, and it’s as if she can be in multiple locations at once.

On Saturday, Liza suffered a stroke, which sent a shock wave throughout the theater and concert industries. News and updates spread quickly all over Facebook. Friends and colleagues have sent out prayer requests for her speedy recovery. And right now, that’s really all anyone can do.

Liza, you have no idea how many people love you and are thinking of you. It’s now time for us to tell you, “Don’t worry, it’s all taken care of.”