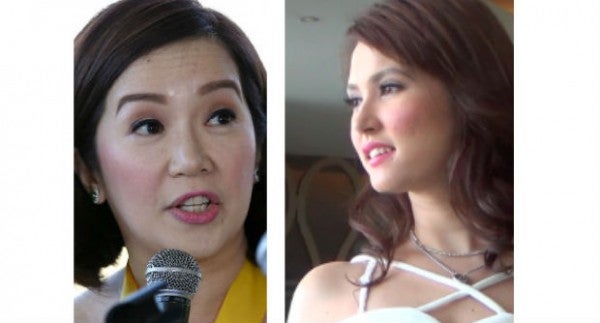 Actress-host Kris Aquino denied on Monday that she had talked trash about former adult film actress Maria Ozawa who recently visited Philippines to pose for a men’s magazine, a report said.

(Just how many men has she been with? They should stop linking her to my older brother.)

In an exclusive statement addressed to Philippine Entertainment Portal (PEP.ph) on Monday evening, Aquino said she did not issue such statement, noting that she does not call her brother, President Bengno Aquino III as “kuya” (older brother).

“If you research all my statements regarding my brother, I never referred or addressed him as ‘kuya,’ only PNoy or Noy. So, du’n pa lang, mali na (So from that information, the report can already be considered erroneous). Only the eldest in our family is called ate (older sister) or kuya, that’s why Ate (Ballsy) is Ate,” Aquino said.

Aquino added that she never had an “exclusive, on-the-spot” interview with a Manila Link correspondent named Cali Hervera.

“I was abroad with my sons. I was in Hong Kong Friday (July 3), I just arrived today (July 6). So how could have they caught up with me? Me (sic) and my manager Boy Abunda do not know Manila Link or anyone from there. So, sa akin lang, kung mag-iingay, sana huwag na akong gamitin (my point is, if they want to gain publicity, they should not use me),” Aquino said.

An earlier report from entertainment website Push said that the Japanese actress was open to the prospect of dating President Aquino.

“That will be a dream come true,” Ozawa was quoted as saying when asked if she would like to be a First Lady.