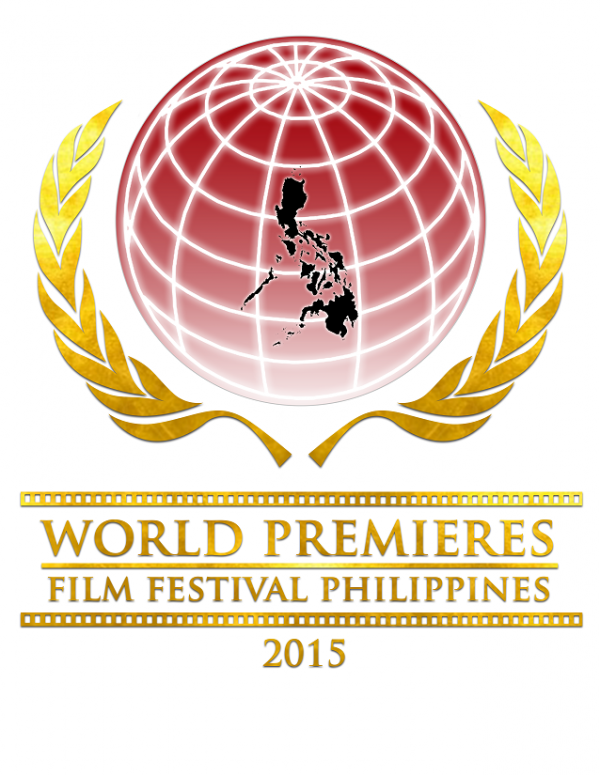 Seven exceptional films from all over the globe will take center stage at this year’s World Premieres Film Festival (WPFF).

Vaulting their spots in the Main Competition category, the films are slated to have their international premieres in Manila from June 29 to July 7.

According to Film Development Council of the Philippines (FDCP) executive director Teodoro Granados, although the films have different themes, there is something special in them that will catch the interest of the Filipino audience.

“There are stories that touch the heart and the intellect,” he told INQUIRER.net.

FDCP received more than a hundred of submissions all over the world for the said category, most of which were submitted online.

The finalists were determined by a special selection committee assembled by the FDCP.

“Normally the [committee] discuss with us why they made their choices. First they wanted to make sure that the film has good qualities…something that has a universal appeal,” Granados said.

“We also went to Berlin, to Cannes, to different film commissions and asked them to provide. We also asked the embassies to search [films] in their countries and recommend films,” he added.

Granados said there is no Philippine entry to the Main Competition category this year because most of the Filipino filmmakers are more interested to compete in New Filipino Cinema section.

Other sections in the festival are Cine Verde, ASEAN Skies, Euroview, Ibero-America, Eurasian Cinescape and Classics.

As a whole, there are more than 70 films from 35 countries all over the world that will be screened at select SM cinemas. They are Mall of Asia (Cinema 6), North Edsa (Cinema 2), Megamall (Cinema 6), South Mall (Cinema 5) and Manila (Cinema 12).

Below is WPFF’s complete schedule of the screenings. 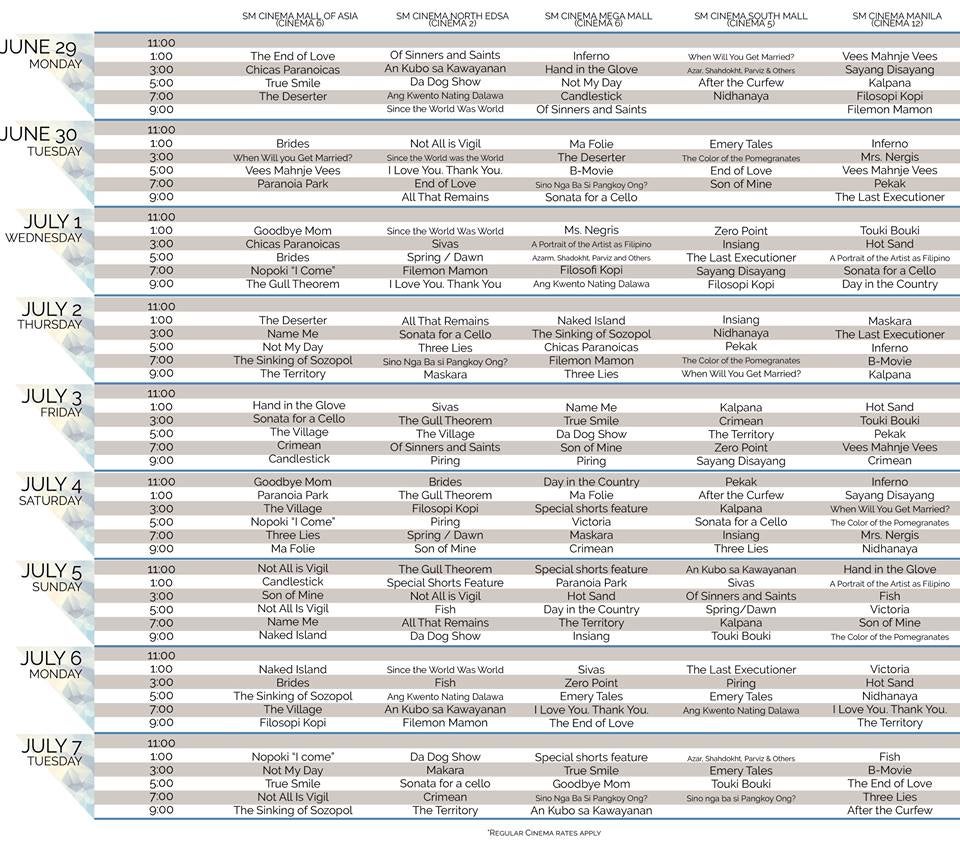 Here are the Main Competition films’ synopses and trailers:

“Filosofi Kopi” (Indonesia) by Angga Sasongko tells a soul-searching tale about making peace with the past through coffee. Ben and Jody are two friends and owners of ‘Filosofi Kopi’, a sophisticated coffee shop known for only serving the best coffee in Indonesia. When a businessman challenges them to make “the perfect cup,” Ben and Jody embark on an adventure that forces them to visit their troubled pasts.  It is a film that not only tells a captivating story, but one that will make us look at coffee with a whole new, passionate perspective.

Aleksandr Melnik’s “The Territory” (Russia) takes place in 1960, a moment of immense transition in the USSR.  Along the earth’s most northeastern shores of the Arctic Ocean in the center of the vast tundra lies the “Territory.”  Legendary geologist Ilya Chinkov is utterly convinced that gold exists in the land and must convince and inspire his brigade.  As they battle against self and nature in search of gold, some continue, some fall. Individual survival and collective triumph do not always converge.

The picturesque Dutch province of Limburg is not what it seems.  “Son Of Mine” (Netherlands) by Remy van Heugten is a gripping social drama about the oppressive relationship between a father and a son, who as modern outlaws struggle to survive.  The story is based on Remy’s personal experiences, having grown up in this poor region of the mostly rich Netherlands.  Father and a son must struggle to survive in this place where the social and economic consequences of the closing of the coal mines, many years ago, are still very much felt.

“The End of Love” (Taiwan) by Li-Da Hsu shows that love has infinite manifestations, but love itself, as many of us discover, can be finite.  In the film, four relationships slowly unravel: a couple involved in social movement activism; a middle-class couple coping with infertility; an old man found his sweetheart in the elderly home; and a young man try winning a woman who was his high-school teacher.

Franco’s dictatorship in 1970s Spain was a silencing, violent one—especially for women. Under church and state, his conservative regime upheld the institution of marriage at the expense of young, single mothers. In Ana Murugarren’s “Three Lies” (Spain), the clever and independent tattoo artist Violeta, who was sold as a baby during the Franco-era, challenges the remnants of the regime under which she was born as she searches for her mother and the truth.

Adapted from Crimean Tartar novelist and poet Cengiz Dagci’s first novel “Horrible Years”, Burak Cem Arliel‘s “Crimean” is set during the Second World War. Sadik Turan fights with the Soviet Red Army against the German Nazis—reluctantly however, after having been oppressed as a Crimean Turk by Russian nationalism since childhood. Despite this, he emerges as a hero for his fellow Red Army soldiers, but then is taken prisoner by the Germans. When they offer to save his beloved Crimea from the Russians, Sadik must walk the tightrope as he dreams of a free Crimea.

Anna Bofarull’s “Sonata For Cello” (Spain) focuses on Julia, an elegant and renowned cellist devoted to her music. After years of intermittent pain in different parts of her body, Julia is finally given the diagnosis: fibromyalgia, a chronic medical disorder that has no known cause or cure. She soon finds herself submerged in a personal state of hell, struggling against her own body.

Read Next
Wonder Girls confirm comeback as band
EDITORS' PICK
Water remains our saving grace right now
The biggest lottery jackpot in the world is $158 million, and even someone from the Philippines could win it
Smart 5G goes live
COVID-19 cases in PH overshoot 122,000 mark
51% of Filipinos think it’s dangerous to publish anything critical about Duterte admin — SWS
PhilHealth mess: Whose heads will roll? Roque says he can’t wait to name names
MOST READ
Captain astonished that his ship delivered Beirut explosive
‘Vexed’: Guanzon raps Topacio over Alzheimer’s remark
Locsin to China: Don’t overinterpret
COVID-19 cases in PH overshoot 122,000 mark
Don't miss out on the latest news and information.