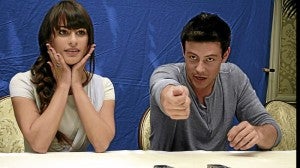 LEA Michele and Cory Monteith talk about their time outside “Glee.” Ruben Nepales

LOS ANGELES—Lea Michele’s Rachel Berry character may have bagged the plum Maria role in her high school’s production of “West Side Story,” but in real life, the “Glee” actress lost in her bid to play Fanny Brice in a Broadway-bound revival of the musical “Funny Girl.”

She would have loved to portray Fanny Brice, Lea told us in a recent interview. “But that’s not what they (the producers) wanted. It will happen though, one day. I will make sure of it and it will be great.”

Lea feels a special affinity to the role since it was first played by her idol, Barbra Streisand, in both the original Broadway and movie versions of “Funny Girl.” Crediting Barbra for inspiring her, Lea belted the musical’s best-known song, “Don’t Rain on My Parade,” at the 2010 Tony Awards.

Who won the role

Lauren Ambrose (“Six Feet Under”)— who won the role over Lea and reportedly other actresses such as Kelli O’Hara, Laura Benanti, Leslie Kritzer and Stephanie J. Block—gets to sing the show-stopping number in the “Funny Girl” revival which opens in LA in January and moves to New York in April.

But Lea is buoyed by memories of her encounters with Barbra. It all began when she performed ahead of the legendary singer at the Grammy Awards’ MusiCares gala last February. “I sang ‘My Man.’ I still get the chills when I think about it. At the end of the night, she was being whisked away past me. There were so many people. I was reaching for her but she was gone. I didn’t get to meet her. Everybody was like, ‘Go, run after her.’ I was like, ‘It’s okay.’ When it’s meant to be, it will be.”

A week later, Lea was at the Grammys waiting for her car service at the valet. “Someone tapped me on the shoulder and it was Barbra! She said, ‘Thank you so much for introducing me to your generation.’ I was like, ‘Thank you so much. You’ve changed my life. I love you.’ She walked away and I collapsed, crying like a crazy person.”

“THE music industry is a whole other animal I don’t think I’m ready to tackle at this point,” says Lea Michele. ruben nepales

The Barbra connection got more engaging recently when reports surfaced that Lea received an interesting response when she tweeted, “Currently watching ‘Hoarders’ and this man has a Barbra Streisand Barbie! Where is this man and how can I get my hands on that doll?”

Lea said, “Barbra tweeted that she was going to send me a Barbra Streisand Barbie Doll. I can’t believe it.”

Back to Ryan, Lea said: “He is incredible in allowing us time outside ‘Glee’ to do things that we might be passionate about. I just did my first movie, Garry Marshall’s ‘New Year’s Eve,’ which is coming out in December. I had the best time. I want to do more films for sure when I have the opportunity. I also want to go back to Broadway. But as far as doing more television, I don’t think that will be something I’ll do unless it were some sort of continuation of playing Rachel Berry, because I think she’s the greatest character ever.”

Lea is in good company in “New Year’s Eve,” which boasts of a star-studded cast: Halle Berry, Michelle Pfeiffer, Robert De Niro, Sarah Jessica Parker, Hilary Swank, Zac Efron, Katherine Heigl, Sofia Vergara and more. “I thought that being part of an ensemble would take the pressure off me, like leading a film,” Lea explained why she chose the project.

“I also wanted people to get to see me in another character that’s a bit more of an adult,” she pointed out. “I worked opposite Ashton Kutcher so that was really great. My character is 25 years old, a backup singer for Bon Jovi. It’s a great segue from ‘Glee’ for my fans to see me as this character who gets stuck in an elevator with Ashton for hours on New Year’s Eve. That was awesome. Ashton was hilarious to work with. I can’t believe that my first film love interest is Ashton Kutcher. If you would have told me that when I was in high school, I would have said you’re crazy.”

We asked Lea what fans can expect from Rachel Berry in the series which continues to get high ratings. “It’s senior year so our big thing is that she wants to go to New York. Finn (Cory Monteith) doesn’t know if he’s the Ohio sort of small town boy or if he’s going to come with Rachel. So that’s our arc,” Lea revealed.

“My story line, aside from having a lot to do with Cory, also involves Chris Colfer,” she continued. “Rachel and Kurt have this Laverne-and-Shirley, Thelma-and-Louise thing going on. They have their ups and downs throughout the year. It’s also about them wanting to go to New York together.”

With the cast for the school’s production of “West Side Story” chosen in last week’s episode, Lea announced that the musical will be mounted in the fifth episode. “That’s when the performance is and we do perform at least five songs from the show,” she disclosed.

She also gave a glimpse on how the cast chills out during rare breaks. “Some people hang out in my room,” she said. “Sometimes we don’t allow the boys in except for Chris. But there’s really no downtime, to be honest. It’s not like we have hours to sit because whenever we do have a free time, they make us go to the dance studio or the recording studio.” She added that the guys play ping-pong in their “base camp.”

“A lot of people ask me, too, if I would consider making an album,” Lea said. “I just feel that the music industry is a whole other animal which I don’t think I’m ready to tackle at this point.”

Cory, whom we interviewed with Lea, gave this update on his character: “Finn is still interested in singing and performing but he’s not sure if he’s good enough to make the big break to Broadway.”

He also did a film, a comedy titled “Sisters & Brothers.”

Asked for an interesting story involving fans, Cory answered: “Man, a girl in Manchester (England) showed up at our hotel. She caught me outside the hotel and said, ‘Would you sign something for me?’ A bunch of us were signing stuff for her. She said, ‘Sign my arm.’

“I was like, ‘Are you sure?’ She handed me a felt pen and I signed her arm. She had my signature tattooed on her arm. I saw photos on the Internet. She actually came to the show. She was in the third row.”