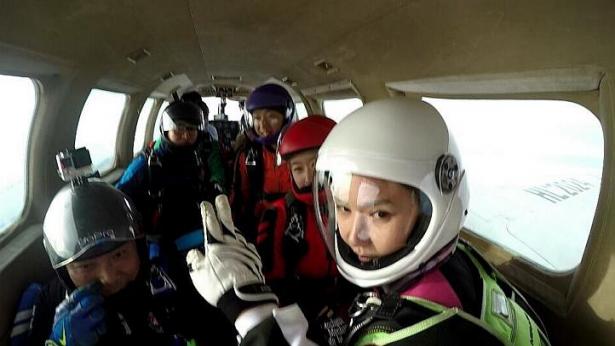 Jung In Ah (white helmet) with friends on board an aircraft, posted on May 25. FACEBOOK PHOTO/JUNG IN AH

SEOUL–South Korean model and actress Jung In Ah, 38, has died after a fatal skydiving accident, according to Korean news reports.

Jung, 38, went skydiving on June 13 in Goheung county in South Jeolla province, located at the southernmost tip of South Korea.

Her body was found on June 16 tangled with her parachute, floating in the sea near a breakwater.

News of her body being found was released by the local fire and rescue department.

Born Jung Hye Young, she studied at Seoul National University graduate school and was said to be a brainy student.

She appeared in the 2008 MBC drama “The Secret Of Keu Keu Island.” The plot was about a group of colleagues who got stranded on a deserted island for 180 days.