There is no such thing as language or cultural barrier when it comes to the art of filmmaking.

The was the central message of the 20th edition of the French Film Festival which kicked off Wednesday evening at the Greenbelt cinemas in Makati City.

Proving as well that the Philippines-France relations go beyond the political sphere, the festival marked its two-decade run with the screening of French family film “La Famille Belier” and the Philippine premiere of Brillante Mendoza’s “Taklub,” a film about the survivors of Supertyphoon “Yolanda” (international name: Haiyan), which received an ecumenical-jury commendation at the recent Cannes Film Festival.

French ambassador to the Philippines Gilles Garachon said the festival did not only embody the common love for cinema of both Filipinos and French, but also served as a medium for the two nations to know more about each other’s cultures.

“You Filipinos have so many stories to tell, and we and the rest of the world are so happy to watch and listen to your stories,” Garachon said.

The envoy also commended the recent feat of “Taklub,” adding that it lived up the spirit of the festival and France’s own advocacies for tackling the issue of climate change.

“I’m very proud and very happy for the Philippines because it (“Taklub” commendation) was so well-deserved. Your cinema production is just so wonderful,” he said. “It’s a wonderful movie about Typhoon Haiyan and the way people rebuild not only their homes but also their lives.”

Garachon said it was an honor to screen an advocacy film like “Taklub,” as Paris is set to host climate change talks by the end of the year. Climate change was also one of the key points discussed during the state visit of French Francois Hollande to the Philippines in February.

Senator Loren Legarda, through whose effort along with those of the Department of Environment and Natural Resources and the Presidential Communications Operations Office-Philippine Information Agency the film got government funding, also graced the event. She echoed the ambassador’s sentiments, saying that the film’s main goal was to highlight disaster preparedness.

“When Yolanda happened so unfortunately in 2013, director Mendoza and I talked about how we can help the people to understand of risk reduction and climate change adaptation,” she said, adding that her initial idea was to create a documentary, but Mendoza proposed a feature film instead. 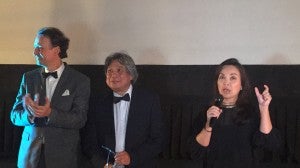 Sen. Loren Legarda, a principal advocate of “Taklub,” delivers her opening remarks before the Philippine premiere of the advocacy film.

While praising the efficiency of Nora Aunor in conveying the film’s message, Legarda shared she did not expect “Taklub” to make it to Cannes, as she only envisioned it to be shown in schools and local cinemas.

Despite not winning in the Un Certain Regard category where it was nominated for, filmmaker Mendoza said a special citation for “Taklub” was more than enough, considering its limited budget.

Mendoza said he has always been grateful for the recognitions, no matter how big or small, his films have received.

The director also shrugged off rumors of a rift with Aunor: “As we far as we are concerned wala namang issue. We have been working very harmoniously from the very start.”

The French Film Festival, which features 19 films featuring the different facets of French society, will run from June 3 to 9.

“This is the age of reason and this is also the age of craziness. And I hope we shall keep this craziness alive, and most of all, our love for cinema,” Garachon said.