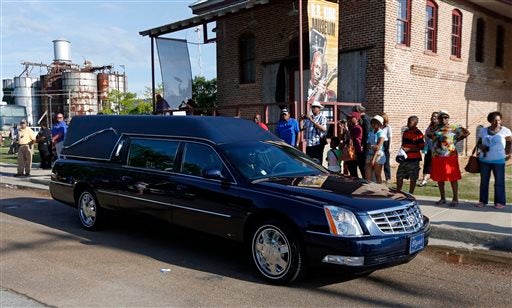 The hearse with the casket bearing the body of blues legend B.B. King leaves the B.B. King Museum and Delta Interpretive Center after a day of public viewing, Friday, May 29, 2015 in Indianola, Miss. The visitation comes a day before the funeral for the man who influenced generations of singers and guitarists. AP

INDIANOLA, Mississippi — Blues pioneer B.B. King is being remembered in the Mississippi Delta as a man whose talent was equaled by his generous spirit.

King’s funeral is Saturday in Indianola — the small town where he first gained attention as a young singer and guitarist who had already been a sharecropper and worked in a cotton gin.

One of his sons, Willie King of Chicago, says his father taught him to respond with love when others are angry.

Mike Doster of Nashville, who played bass in King’s band for 17 years, describes King as a good boss who was “very demanding but very fair.”

King was 89 when he died May 14 at his home in Las Vegas. More than 4,000 people viewed his open casket Friday in Indianola.