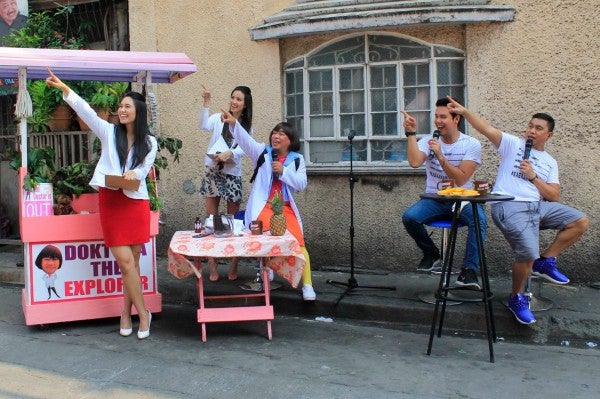 The hosts of noontime show “Eat Bulaga” have been slammed after advising a gay father to “go back in the closet” to save his children from being ridiculed.

In its May 22 episode during its “Problem Solving” segment, a gay man named Diamond sought the advice of the Eat Bulaga hosts on how he should spare his three children from being bullied. He said that since his eldest child was about to enter school, his child might be ridiculed by his classmates for having a gay father.

To which cohost Sen. Tito Sotto said:  “Sa madaling salita, ibalik sa closet! (In other words, get back in the closet!)”

Diamond then replied: “Kaya ko po. Kakayanin ko po siyempre kahit mahirap po talaga. Kakayanin ko po para sa mga anak ko (I can do it. I have to try even if it is difficult. I will do it for my children).”

Manalo added that Diamond should be wary of telling signs that his sons might also be gay.

The father said that should his children choose to be gay, he would support them just like what his father did.

The comedian then said: “Bakit pa kasi nag-asawa ito (Why did this man get married)?”

The opinions of the variety shows’ hosts disgusted Cha Roque, who penned an open letter scoring the show and its hosts for making homosexuality appear as “a disease and that he should keep it from his kids so as not to ‘infect’ them with it.”

“It was an immature and uneducated move. Eat Bulaga is an institution, you have millions of followers spanning the whole Philippines. Needless to say, the personalities in your show are influential. You even have a senator blatantly telling this guy to go back to the closet. Don’t you have gay or lesbian colleagues or staff in your show? What if the participant was a lesbian mom? Would you ask her to go back to the closet as well? Would you say the same to Aiza Seguerra if she was in the situation?” Roque’s open letter read.

Roque, who described herself as a “lesbian mom” to her 11-year-old child, said members of the LGBT did not want to hide and wanted to be accepted.

Eat Bulaga has not yet issued a statement in reply to Roque’s open letter. AJH/RC

Read Next
For the love of Dessa
EDITORS' PICK
Watch live performances by ITZY, Mamamoo and other K-pop stars on Smart’s GigaPlay App
Duterte OKs limited in-person classes for 2-month testing in more than 100 schools
An innovative, fun shopping experience AllDay
Welcome the next imagery master with vivo X70 co-engineered with Zeiss
EDITORIAL: The bogus anniversary
Survivor can’t ‘comprehend’ experiencing martial law again
MOST READ
Pharmally funding came from friends, not me, Michael Yang insists
Walk out of a hearing if Gordon starts shouting at you, Duterte tells Cabinet officials
ACT-CIS Rep. Yap names Pimentel of using ICC for political agenda
Robredo, Moreno among 1Sambayan’s top bets to lead opposition in 2022
Don't miss out on the latest news and information.