Angel is ready to get hitched 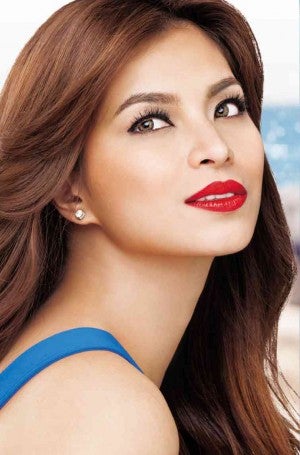 At 30, actress Angel Locsin said she is “emotionally and financially ready” to settle down with her boyfriend, TV host-actor Luis Manzano.

However, the actress refused to feel pressured by family and friends who want her to get hitched pronto, especially since she said she was certain Luis is “the perfect guy” for her.

“God’s timing is always perfect. I know that it’s not happening now because He still has other plans for me. That’s also why I’m not rushing,” Angel told reporters during the recent “Cirque du Paradis” event hosted by Avon Tropical Paradise, which the actress endorses, at the Amber Ultra Lounge in the Fort Strip on Thursday.

“I think Luis is waiting for me to propose to him. He often says he has found the perfect ring that he’d ask me to buy for him,” she quipped. “Seriously, we see a lot of friends, especially in show business, who are taking their relationships to the next level, but marriage is not like a pair of shoes that we wear because it’s trendy and then later discard when it’s already outdated.”

She added: “Whether the wedding will happen this year or next is not important. If you’re in a relationship that makes you feel secure, then waiting becomes much easier. I’m happy that Luis understands how committed I am to my work. We talk about settling down, but only in passing. We don’t really sit down and discuss it.”

Luis’ mom, Batangas Gov. Vilma Santos, has repeatedly said she wants a grandchild. “I love kids, too. I borrow my friends’ babies, especially (friend and fellow ABS-CBN talent) Dimples Romana’s. Her baby is so cute. But I prefer to get married first before having my own child,” Angel said.

The actress said her dad, Angelo Colmenares, adores Luis. “He likes it when Luis visits him. Luis brings him chocolates, and makes him laugh,” Angel told the Inquirer. “Before Luis and I got back together, he went to our house to talk to my father. He said, ‘I cannot promise anything to you, but beautiful grandchildren.’ That really made my dad laugh. It’s important for me that my partner cares for and respects my family.”

Angel is currently working with Luis’ mom in a Star Cinema-produced film where she plays a nurse. “I have to memorize a lot of things—not just medical terms, but also the names of different kinds of medicines. My [real-life] best friend is a nurse and… the movie renewed my respect for nurses and other health workers. It’s so sad that they only get very little compensation for their hard work.”

Angel pointed out: “The job of a health worker is important. They cannot afford to make mistakes—even a small one could be deadly. This is an inspiring film. It’s a modern take on a mother-daughter relationship.”

Asked about Luis’ reported plan to join politics, Angel said her boyfriend has not decided yet. She also clarified that she would not run for public office. “I prefer to be a follower rather than a leader. A public servant is someone who should be able to make people believe in him and eventually follow him.”

She said one doesn’t have to be a politician in order to help others. “That’s why I always join campaigns similar to Avon’s… those that promote specific causes… projects that fight for the rights of women.”