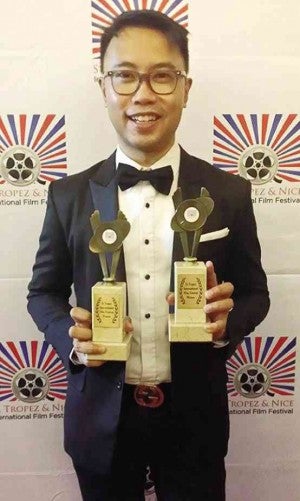 This latest triumph was a fitting way to begin her birth anniversay week, said Nora Aunor, known as the country’s superstar.

Early Sunday morning, the Inquirer received a text message from La Aunor, confirming the double victory of her film, Perci Intalan’s psychological thriller “Dementia,” which won two awards at the St. Tropez International Film Festival, held in the south of France the night before (May 16).

“It’s a beautiful birthday gift,” Aunor, who opted to stay in Manila, told the Inquirer via SMS. “I was so happy because the news was relayed to me by our talented director and producer, Perci.”

Aunor turns 62 tomorrow. Instead of traveling to France to grace the world premiere (yesterday) of her latest film, Brillante Ma. Mendoza’s “Taklub,” an entry in the Un Certain Regard section of the Cannes International Film Festival, Aunor decided to celebrate her birth anniversary in the country.

A third Filipino won at the St. Tropez fest: Emilio Garcia topped the best supporting actor in a foreign language film category for his work in Jason Paul Laxamana’s “Magkakabaung (The Coffin Maker).”

Garcia, who was in Manila, told the Inquirer via SMS: “I was surprised and, at the same time, overwhelmed and truly honored. I am thankful for the chance to act in a movie like ‘Magkakabaung.’”

It was his second international recognition, after tying for best actor with “Selda” costar Sid Lucero at the Thessaloniki International Film Festival in 2008. “I am happy … to give honor and pride to our country for the talent God has blessed me with.”

“When Ate Guy (Aunor’s nickname) won, I was happy and content already,” Intalan told the Inquirer in an email. “In my speech [to accept Ate Guy’s trophy], I said that I was proud to have played a role in showing to the world Ate Guy’s gifts as an actor. After all, she’s a legend in the Philippines; she is our Meryl Streep!”

Winning best foreign language film was a pleasant surprise, Intalan admitted. “We had to compete with so many movies from all over the world—over 50 films, according to the host. At first, I was intimidated by the other filmmakers whom I had met before the awards ceremony. But it was a thrill that our film brought home two trophies.”

He dedicated the victory to the entire “Dementia” team. “I was at a loss for words during my acceptance speech. I remember thanking the festival organizers and sharing the award with the cast and crew, especially my coproducer and husband, [filmmaker] Jun Robles Lana.”

After the St. Tropez event, Intalan traveled to New York, where “Dementia” is the closing movie at the Soho International Film Festival, which will end Thursday.