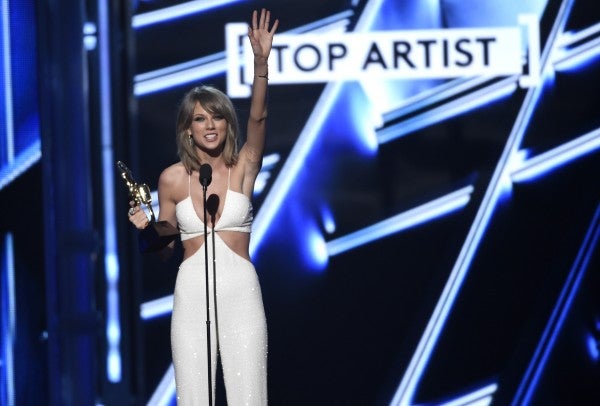 Taylor Swift accepts the award for top artist at the Billboard Music Awards at the MGM Grand Garden Arena on Sunday, May 17, 2015, in Las Vegas. AP

LAS VEGAS — Taylor Swift dominated the Billboard Music Awards with eight wins, including top artist, while Kanye West was booed during his performance that closed the three-hour event.

“Oh, this is such a good night!” she said after winning the top prize, besting One Direction, Ariana Grande, Sam Smith and Katy Perry. “Early this morning I watched my brother Austin graduate from Notre Dame … (and) to anyone who’s graduating this year … this is for you.”

“This is kind of a graduation for us,” Swift said to the audience of top musicians.

West, however, was booed during his smoky performance of “All Day” and “Black Skinhead.”

“And now a doctor,” Kylie Jenner said while introducing the rapper, who earned an honorary doctorate from the Art Institute of Chicago last week.

Swift owned the night with wins for top Hot 100 artist and the fan-voted artist achievement award.

Swift kissed her rumored boyfriend Calvin Harris on the cheek and gave him a hug at the MGM Grand Garden Arena in Las Vegas. Swift, who sat next to the DJ-producer-singer, kicked off the awards by debuting her action-filled music video for “Bad Blood,” which stars Selena Gomez and Lena Dunham and showcases Swift as a fighting vixen.

The video opened with Swift and Gomez fighting men in an office and then fighting each other. It ended with Swift’s and Gomez’s armies going head to head. Other stars in the clip included Mariska Hargitay, Ellen Pompeo, Jessica Alba and Ellie Goulding, and Hayley Williams of Paramore.

Swift swapped her first two verses with new ones from rapper Kendrick Lamar for “Bad Blood,” a song rumored to be about Swift’s friendship with Perry.

“I am so excited I got to show the world,” Swift told the audience. 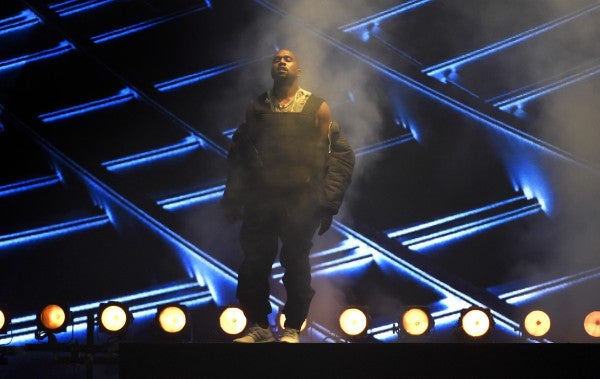 Kanye West performs at the Billboard Music Awards at the MGM Grand Garden Arena on Sunday, May 17, 2015, in Las Vegas. AP

“There is one more person to share this with, and that’s our brother Zayn,” Liam Payne said of Zayn Malik, who left the boy band.

Like Azalea, Smith and Pharrell also won three awards — the most after Swift.

Smith, who recently had vocal surgery, didn’t attend the show. He wrote his thank you speech on cue cards, which aired via video when he won top male artist.

Van Halen was the night’s first performance and rocked the crowd with its 1984 hit “Panama.” Mariah Carey sang her first hit, “Vision of Love,” which was pitchy. She followed it with new single, “Infinity,” where she also struggled. She ended with a strong high note, though.

Britney Spears was energetic when she performed her new single, “Pretty Girls,” in a sheer black cat suit alongside Azalea. Swift and Zendaya sang along as Nicki Minaj mainly danced, barely singing or rapping live and relying on a backing track during “Hey Mama” and “The Night Is Still Young.”

The Simple Minds performed “Don’t You (Forget About Me)” from “The Breakfast Club,” which is celebrating 30 years. Molly Ringwald introduced the band and stood next to Swift in the audience while they performed, and the women seemed to exchange numbers.

Meghan Trainor performed a duet with John Legend and won hot 100 song for “All About That Bass.” She was teary and shaky onstage, as was her friend and collaborator Charlie Puth, who performed “See You Again” with Wiz Khalifa earlier in the show.

Hosts Ludacris and Chrissy Teigen offered some jokes Sunday night: The rapper described why he’s a good host, namechecking his music and acting credits. Teigen, a model, replied, “And I bang a musician” as her husband, John Legend, stood up.

“I have to thank, of course, my beautiful co-host, my lovely wife, Chrissy Teigen,” he said. “I am so proud that we won this award together tonight.”

Ludacris offered some words about the late B.B. King and his renowned career while the camera panned to a guitar on an empty stage.