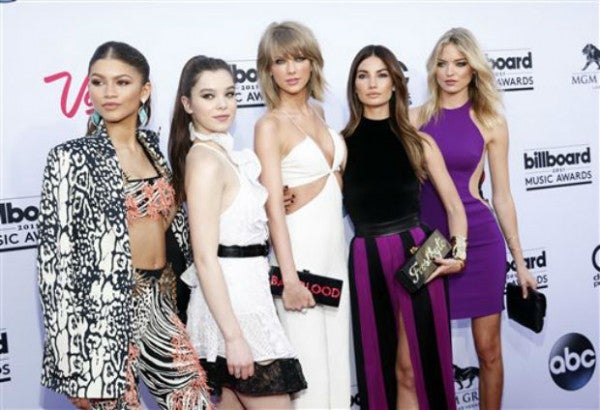 Taylor Swift arrives at the Billboard Music Awards at the MGM Grand Garden Arena on Sunday, May 17, 2015, in Las Vegas. AP

Swift swapped her first two verses with new ones from rapper Kendrick Lamar for “Bad Blood,” a song rumored to be about Swift’s friendship with Katy Perry.

“I am so excited I got to the show the world,” Swift told the audience Sunday at the MGM Grand Garden Arena in Las Vegas.

One Direction, which recently downsized to four members, won the night’s first award for top duo/group. “There is one more person to share this with, and that’s our brother Zayn,” Liam Payne said of Zayn Malik, who left the group.

Van Halen was the night’s first performance and rocked the crowd with its 1984 hit “Panama.”

The night is expected to include other top-notch performances, including ones by Mariah Carey, Britney Spears, Iggy Azalea, Nicki Minaj, David Guetta, Chris Brown, Pitbull and Ed Sheeran. Kanye West will close the three-hour show.

Hosts Ludacris and Chrissy Teigen offered some jokes Sunday night: The rapper went on to describe why he’s a good host and namechecked his music and acting credits. And then Teigen replied: “And I bang a musician” as her husband, John Legend, stood up.

Sam Smith follows behind Swift with 13 nominations. The British crooner won’t attend the show Sunday because of vocal-cord issues. He also cancelled his weekend performance at the Rock In Rio USA Festival in Las Vegas, which starred Swift and Bruno Mars on Friday and Saturday.

Smith, along with Ariana Grande, One Direction and Katy Perry, will compete Swift for top artist.

Imagine Dragons will pay tribute to Ben E. King, while Charlie Puth and Wiz Khalifa will perform their dedication to actor Paul Walker, the No. 1 hit “See You Again.”

And there may be a tribute to blues legend B.B. King, who died Thursday in Las Vegas. “At this point we are really not sure, but it will be acknowledged in the broadcast for sure,” executive producer Robert Deaton said in an interview Friday.

“We are working on it,” executive producer Mark Bracco added. “There’s going to be a lot of emotion in the show in addition to a lot of fun.”

Taylor Swift wins artist of the year at iHeartRadio Awards