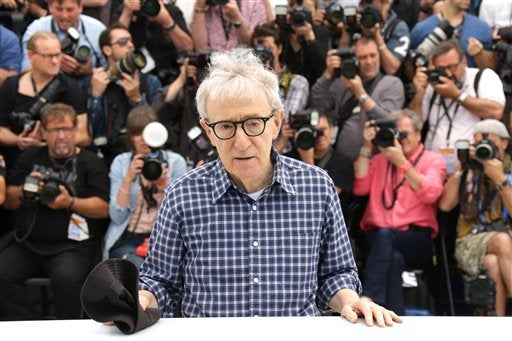 CANNES, France — Woody Allen returned to the Cannes Film Festival on Friday to show his latest film, “Irrational Man,” speak about what he called the meaninglessness of life and confess that trying his hand in television was “a catastrophic mistake.”

It’s Allen’s 11th film at Cannes but the 79-year-old writer/director’s films have always played out of competition, as he has long disdained prizes in art.

“Irrational Man,” due in U.S. theaters July 17, received a mixed reaction Friday from the critics at Cannes. For Allen film fans, however, the movie had many of his traditional hallmarks. Although set in a new locale for the director, “Irrational Man” contains familiar struggles with finding meaning in life, a romance with a younger woman and a general lightness of tone even amid the possibility of murder.

Allen told reporters that he and his protagonist both have similar feelings about the usefulness of philosophy.

“There’s no positive answer to the grim reality of life, no matter how much the philosophers talk to you or the priests or the psychologists,” said Allen. “The bottom line after the all talk is: Life has its own agenda and it runs right over you while you’re prattling. We’re all going to wind up in the same position sooner or later.”

Some highlights from Allen’s comments in Cannes:

ON HIS SIX-EPISODE AMAZON SERIES

“It was a catastrophic mistake for me. I’m doing my best with it. I’m struggling with it at home. I never should have gotten into it. It’s very hard for me. I thought it was going to be easy. You do a movie, it’s a big long thing. To do six half-hours, I thought it was going to be a cinch. … I don’t know what I’m doing. I’m floundering. I expect this to be a cosmic embarrassment when it comes out.”

ON REMAKING HIS FILMS

“I would shoot them all over if I could. … I could very happily take every movie I have and improve it if I could get the cast back, the circumstances back, roll back time, get the money.”

“The only thing you can think of as an artist is try to come up with something where you explain to people why life is worth living, and is a positive thing, and does have some meaning. Now, you really can’t do that without conning them. You can’t be honest and do that. Because in the end, it has no meaning. You’re living in a random universe. You’re living a meaningless life.”

ON LEARNING AS A FILMMAKER

“After your first two or three movies, you learn all you’re really going to learn.”

ON WORKING AGAIN WITH EMMA STONE

“She’s the first thing I thought of. … She acted the role so far beyond what I expect. I knew she’d be good, but I didn’t realize how good she was. I didn’t realize what a deep, wonderful professional actress she was. I’ve only had a good time with her.”

ON WORKING WITH PARKER POSEY