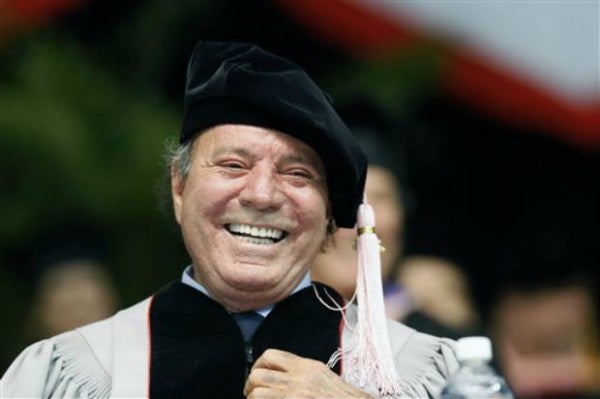 Julio Iglesias smiles before receiving an honorary doctor of music degree from Berklee College of Music during commencement ceremonies, Saturday, May 9, 2015, in Boston. AP

BOSTON — Julio Iglesias and three other prominent music industry figures have received honorary degrees from Boston’s Berklee College of Music at its commencement.

Iglesias, who has recorded more than 80 albums in his career, was awarded an honorary doctorate of music on Saturday.

Berklee says Iglesias and the others were recognized for their achievements and influences in music and for their enduring contributions to American and international culture. On Friday night, the college held a private concert honoring them with music associated with their careers.

Read Next
Love Knots, May 11, 2015
EDITORS' PICK
We Can’t Guarantee You’ll Win a P20 Billion Jackpot, But We Can Help You Try
SM continues to send relief assistance to remote towns in Batangas
Sex on the menu for Pogo workers
Best Gift Ideas in the Philippines
First female commodore named
Foreigners prepare to flee as China virus toll tops 100
MOST READ
Sex on the menu for Pogo workers
Hidilyn Diaz wins 3 gold medals in Weightlifting World Cup
Kobe Bryant gear pulled out of Nike online store in wake of his death
Cruise ship carrying Chinese tourists cancels port call at Subic amid protest
Don't miss out on the latest news and information.