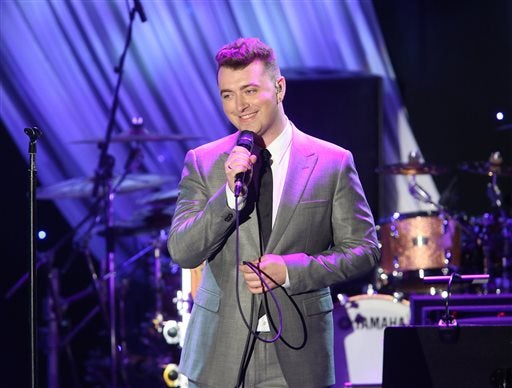 CITING “serious issues” with his vocal cords, Grammy-winning singer Sam Smith announced on Facebook that his Manila show at SM Mall of Asia (MOA) Arena on May 10 would be postponed.

Smith’s one-night show was supposed to be the finale of Music Management Inc.’s (MMI Live) “British Invasion” concert series which previously featured The 1975, The Vamps, Ed Sheeran and One Direction.

It was supposed to be the 22-year-old British singer’s first time in Manila, one of the stops of his current world tour titled “In the London Lonely Hour,” which was organized to support his debut album of the same title.

The tour kicked off in January.

On his Facebook page, Smith wrote on Monday: “I have some bad news. I’ve been to the doctors today and although my four days of vocal rest has definitely helped. I still have some issues with my vocal cords.”

He said he is set to visit a specialist in the United States, “as a result I need to reschedule the shows to later this year.” 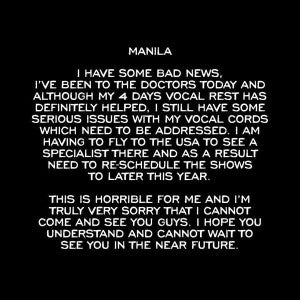 Smith said the postponement “is horrible for me and I am very sorry that cannot come and see you guys. I hope you understand … I cannot wait to see you in the near future.”

Smith, who took home four trophies at the recent Grammy Awards, earlier announced that he had been diagnosed with vocal cord hemorrhage.

Last week, he had to cancel the Australian leg of his tour upon his doctor’s advice.

“I am deeply, deeply saddened,” Smith said on an Instagram post. “I have been vocally exhausted for a while now. I am so sorry to all who have bought tickets, I truly am. This kills me.”

Famous for strong, emotive vocals, Smith—like fellow British artist Adele—has channeled heartbreak to musical success. His biggest hit so far is the gospel-inflected “Stay with Me,” which topped British charts and peaked at No. 2 in the United States.

Meanwhile, a publicist for concert promoter Music Management International said that the show is just “postponed and not canceled.”

“We’re still waiting for a new date,” he told the Inquirer.

Tickets can be refunded through SM Tickets, but the publicist advised against doing so at the moment, saying that those who will refund their tickets, will be relinquishing their slots to other prospective concertgoers, who will be put on a waitlist.